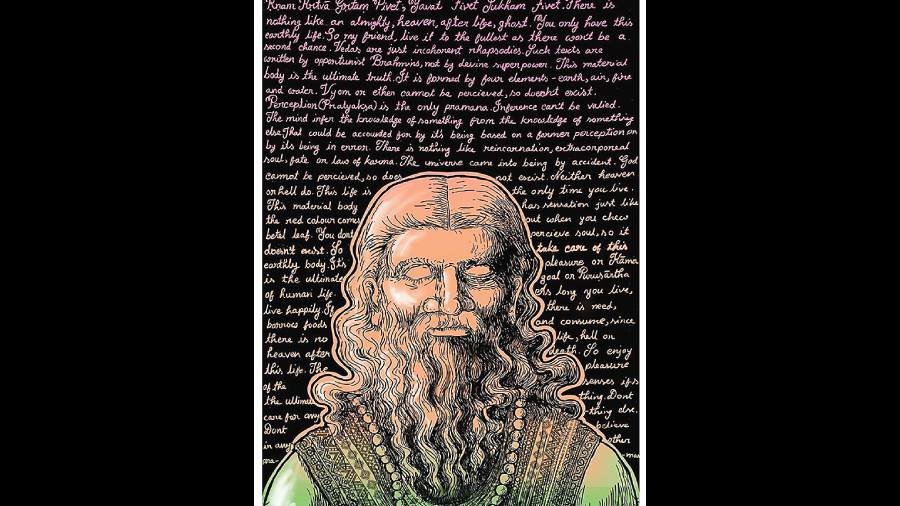 Book: The Truths and Lies of Nationalism: As Narrated by Charvak

On an autumn evening in Covid-riddled Calcutta, Partha Chatterjee, the eminent historian and political theorist, discovered a sealed packet at his doorstep. When curiosity overwhelmed the usual apprehensions, he opened the packet and found a handwritten manuscript in a familiar North Indian language. The author, to Chatterjee’s increasing surprise, was unfamiliar and familiar at the same time. We did grow up with the name, Charvak, since school as the epitome of rationalist thinking in ancient India. But to think that he was still active and sending manuscripts to people’s houses is a bit of a stretch. Chatterjee might have thought that this was a prank or somebody borrowed it as a pseudonym as the current political situation does not allow much free thinking.

So did I when I started reading this extraordinary account. But as the book progressed, I was convinced that it could only be him who could have uttered these powerful words with the precision of an experienced brain surgeon — words, which irked the Brahmans of his day and would continue to discomfit today’s Brahmans (the powers that be) even more. We must start, therefore, by thanking Chatterjee for translating and editing this narrative, which is both a historical tour de force and a political exposition that very few could match in recent times.

The first thing that strikes in the narrative is how Charvak hasn’t lost his biting wit and clarity of vision. The account is both timeless and contemporary, effortlessly moving between thematic contemplations and historical examples in prose that is welcoming but not without gravitas. It does not spend much time in explaining his philosophical system but in a short introduction aptly titled “Charvak Speaks”, he informs that he would rather be called a sceptic than a hedonist or materialist — a non-believer in common-sense truths or, in our time, WhatsApp forwards. The example that he gives in this context reminds us of another sceptic from centuries and enlightenments apart, David Hume of Scotland. But there is a difference. While Hume’s scepticism holds the entire process of knowledge formation suspect, Charvak sounds like a realist by his own admission. He admits the impracticality of meaningless rituals but also acknowledges the importance of imagination in the face of limitations of human knowledge. One could imagine Hume, Charvak and E.V. Ramasamy, the three doyens of sceptic rationalism, having an impassioned debate over some of these issues on an autumn evening in a Calcutta coffee shop.

One of the greatest and most powerful of these imaginations is that of the nation, around which Charvak organizes his narrative. The discussion can be divided into two parts. In the first five chapters, Charvak busts some of the myths about the ahistoricism of the idea prevailing in the everyday circulations of its meaning, including the comfort many find in the geographical certainty of its borders. By describing the accidents of its colonial and postcolonial histories, Charvak argues that India as a nation is an outcome of var ious ideological investments, political manoeuvres and administrative negotiations that produce a fiction of continuity for the sake of their own justification. Many of these arguments are well-known but, in a battle of WhatsApp forwards, we often fumble for the right details and fail to come up with the right example at the right moment.

This account does not only provide the resounding arguments that the left-liberal critics can arm themselves with but also exposes the chinks in their already-existing armour. One of the most intriguing chapters is the one in which Charvak shows, quite assiduously, how sometimes the legacy of a ‘pluralist, secular democracy’ arises out of quests and discoveries of the same historically unsubstantiated continuity of the nation and national life. Any argument without this awareness can do more harm than good.

The second part of the book describes in three chapters how the Indian nation could be and should be imagined — as a national people’s federation. “The Indian nation undoubtedly exists in every part of the country,” Charvak speaks. But here is the caveat. In each part, people have developed their own notions of it through collective struggles, lived experiences, and shared identities and principles. Giving equal legitimacy to all these claims over imagined yet historically realized communal lives within a less centralized federal structure will achieve a just, equal and beneficial society. Rather than the slogan of unity in diversity, the diversity must be taken as the strongest symbol of unity.

In his “Editor’s Preface”, Chatterjee wonders why he was chosen as the recipient of the manuscript. I have a theory about that. In 2018, Chatterjee delivered the Ruth Benedict Lectures at Columbia University (later published in the book, I am the People: Reflections on Popular Sovereignty Today). In these lectures, he spoke about the Gramscian analysis of the gulf between the nation-state and people-nation as one of the challenges faced by the popular sovereignties today. One may find reverberations of the same concerns and recommendations of similar counter-strategies in Charvak’s narrative. I strongly believe that Charvak was in his audience during these lectures. That explains why nobody else could have received the manuscript and translated it with such lucidness and solidarity. Unlike the national borders, this is not an accident.