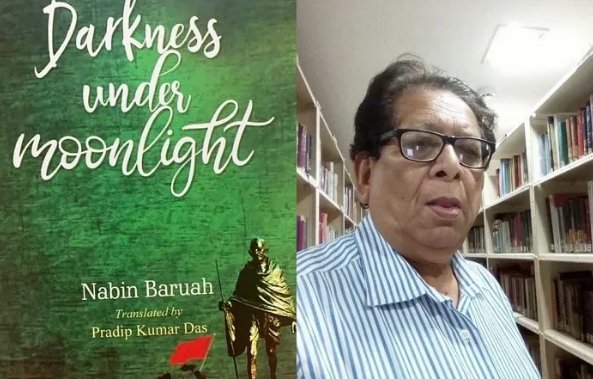 “Artists use lies, to tell the truth. Yes, I created a lie. But because you believed it, you found something true about yourself.” That is how Alan Moore explains the role of a novelist in fiction and this exactly came to my mind when I read Nabin Baruah’s Amogh Nibir Andhakar, translated as Darkness under Moonlight by Pradip Kumar Das.

The novel was scripted boldly in the socio-political context of the seventies for giving us a faithful picture of life and its sadness under the chains of political opportunists, snobs and selfish people Darkness under Moonlight is itself a romantic title used ironically for delineating the harsh reality around him.

The novel shows how a romantic mind falls on the thorns of life and bleeds profusely when we see the inner sadness oozing out of the narrative in the novel. It is sadness not fully personal, but one born out of debilitating human condition and social stress and the vitiated environment. Pradip Kumar Das, former director of Oil India, the translator of the book writes lucid English and felt the connotation of the novel and rendered with great care the original nuances that Nabin Baruah created in the Assamese version.

Translator Pradip Kumar Das deserves an encomium for making this available for non-Assamese readers outside Assam. It is really surprising that being himself a mechanical engineer by profession as a teacher and also in the industry for four decades he shows his forte in literature even as a translator of children’s literature. This is his first translation of a serious novel but he did it skillfully.

The novel focuses on the Assamese middle class and its typical mentality. Even the print media at that critical time played shy and stooped low before the power of political maneuvering. The novelist depicted faithfully the flux of the ideological strain and conflicts through the interaction of characters and situations in this novel of 124 pages. Nabin Baruah is a very well–known name in the history of Assamese fiction and since his fictional debut with the famous campus novel Cotton College (1970) which was a breakthrough of the genre inspired by Homen Borgohain at that time even publishing it in a series in Assamese magazine.

In that novel, he graphically presented his lived experiences as a student in the premier institution of higher education in Assam, as Francis Fitzgerald wrote it in the world famous campus novel This Side of Paradise on Princeton University USA. In the fiction of Nabin Baruah society comes beaming bright overriding the personal though the stories are woven as a writer’s own soliloquy. Still, the novel shows tacit compromise increasingly has a harmful impact on the characters of the lawmakers and sections of the middle class and hinders the upward movement of the society with abiding values.

The very beginning of the novel is so graphic. In the first-person narrative, the novelist seems to be more comfortable though the stories are not about his own life but about what he sees around him. It is an urban setting of a small town that comes alive sometimes with the occasional flurries of excitement from theatre when characters like Malabika Dutta or Maneesha Duara become the subject of hot middle-class gossip or even simple ordinary people like Aravinda or Dulal Dutta got their transfer or when the Minister like Bijoy Shankar Baruah expresses his desire to meet the novelist while he is in a job as a reporter.

His different homely mindset is clear when he is more interested in the meeting with a lively and bubble bhavi Apu dada’s wife Nirmali than meeting with the Minister. To mistake the house of Bijon for a hotel, to get amazed by the big tiger-like dog, and the palatial house where only a gardener and a cook only stayed are all ironically depicted with a touch of mystery in the Hitchcock novel. The narrator is not comfortable with drinking and the story of Suleiman is so vividly narrated yet.

He was a boy of quiet nature fond of reading books and even today we know Nabin Baruah as a bookaholic. He is the writer of the writers’ inspiration for many young writers not merely publishing their books but takes care of the books by dynamically promoting them on social media and keeping personal touch. This committed man of literature is not fully understood yet nor he is considered for any award while such awards are given to many with one book given heavy publicity for each edition and for mysterious connection with the Award committee people.

Nabin Baruah cannot stoop so low and the books like Darkness under Moonlight do not get the limelight in the media except on some Facebook posts. This is a sorry state of affairs for Assamese literature as well. Pradip Kumar Das has rendered the book a great service and it now may reach a wider readership. In this novel, a sense of humour is reflected in casual authorial comments which may make the feminists angry. One such line is ‘Women usually forget the world when they enter a bathroom” though Moorthy was an exception. In this novel, another important thing is meeting people of olden times and the feeling of cordial surprise is expressed again and again be it Nirmali Bhabi or with Kalu Bhai.

In today’s world, these personal touches and feelings are gradually disappearing which Nabin Baruah still cherishes. One of the most friendly novelists and a patronizing person without any ego he moves on even in real life as in the narrative of the book. In a sense, the novel is autobiographical though the personal is transcended to the impersonal and the story of Nabin Baruah becomes easily a fictional representation of the seventies as if it were a historical document felt with deep poetic sensitivity.

The narrative is so simple that it never creates distances the readers who can see their own life in it. Some anger and some dismay too are enjoyable sometimes as when Moorthy angrily says, “Politics and politics. These days there is only politics even in a good act. Nothing good is possible in this country because of these communists.”

This big question will make the novel ever more intriguing and interesting. The novel reminds me of Raja Rao’s Kanthapura where he too depicted Gandhi without making him a character in the novel. The novel Darkness under Moonlight ends so sadly as if a romantic lover gradually losing sight of his beloved, “Couple of tears rolled down my cheeks, I looked back once. Gandhiji’s statue was gradually fading in a dense fog of the late night.”

Dr. Ratan Bhattacharjee, a senior academician and writer, may be reached at: [email protected]