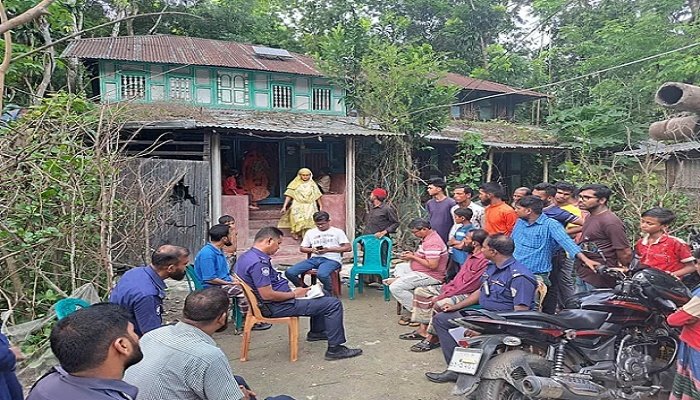 The home of Bayezid Talha, who has been arrested for removing nuts and bolts from a railing of Padma Bridge, in Patuakhali was vandalised on Monday.

A group of people chanting slogans of Bangladesh Chhatra League attacked the house situated in the Telikhali village under Laukathi union of Patuakhali Sadar, claimed a family member of Bayezid.

Bayezid was seen removing a nut from a railing of the bridge on Sunday in a video that has gone viral in social media. The police later nabbed him from Shantinagar, Dhaka.

A case has been filed against Bayezid under the Special Powers Act with Padma Shetu Dakkhin Thana.

Bayezid is the youngest of three brothers. His eldest brother Ahmed Ali works in Khulna and his second elder brother Sohag Mridha works in Dhaka. Sohag’s wife Khadija Akhter lives in their home in Patuakhali with their children.

Bayezid’s sister-in-law Khadiza said, at around 4:00pm a group of 20-25 people came to their premises riding on 7-8 motorcycles. They attacked the house with machetes and other lethal weapons.

She said, Bayezid’s father Alauddin Mridha and mother Piara Begum are currently in Dhaka. She is concerned for her safety after the attack. She further said that the attackers were chanting slogans of the Chhatra League.

The district Chhatra League’s defunct committee’s vice-president Hridoy Ashish told Prothom Alo, Padma Bridge is a national property, which will play a crucial role in the nation’s economy. Seeing the video of Bayezid removing bolts from the bridge has enraged many locals. The locals have protested. The Chhatra League were not involved in the incident.

A Police team went to Bayezid’s home after the attack. The officer in-charge (OC) of Patuakhali Sadar police station Md Moniruzzaman said they sent a police team at the spot after the news of the attack.