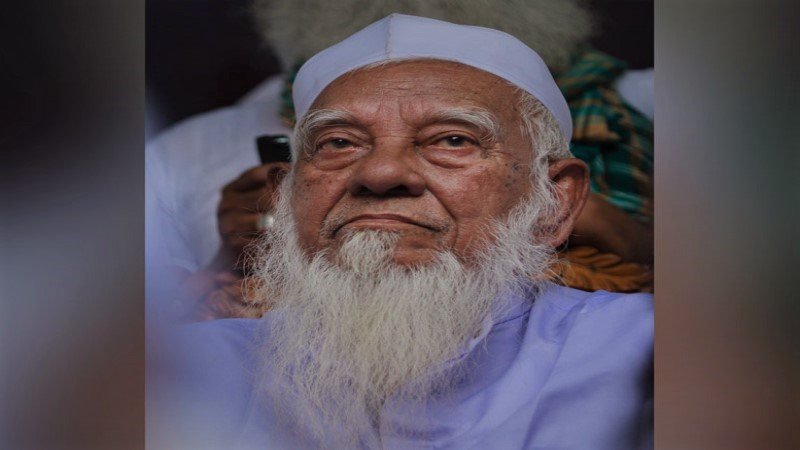 Allama Shah Ahmad Shafi, the rector of Hathazari Madrasa and chief of Hefazat e Islam, breathed his last in a hospital in the capital on Friday evening, within 24 hours of resigning from his post at Hathazari in the face of student protests.

Shafi’s son Anas Madani confirmed the matter, saying his father died at the Asgar Ali Hospital in Gendaria around 6:40 pm in the evening.

Shafi was shifted from Chattogram Medical College Hospital in the afternoon as his condition deteriorated.

Earlier Shafi, also the chief of Hefajat-e-Islam, resigned from his madrasa post after a meeting of Majlis-e-Shura (policymaking body) on Thursday night, citing health grounds.

He was admitted to Chattogram Medical College Hospital and later shifted to a hospital in the capital.

Shah Ahmad Shafi was rector of Al-Jamiatul Ahlia Darul Unum Moinul Islam Hathazari, to give the institution its full name, and also the chairman of Bangladesh Qawmi Madrasah Education Board.

He was born in 1916 (1334-35 AH) in Rangunia of Chattogram and was educated at Hathazari Madrasah and Darul Uloom Deoband.

Bangladesh to secure 8th position in remittance receiving in 2020: WB

Fortnite to return to iPhones via Nvidia cloud gaming service

Dietary supplement may help in treatment of fatty liver: Study

London police to recruit 40% of officers from minority backgrounds

BD: Age limit relaxed for all govt jobs except BCS

Affiliated college students protest as DU indifferent to their demands

IDCOL gets US$ 256.5m from Green Climate Fund

What measures being taken to bring back fugitive Haldar, asks HC

Unesco seeks ‘renewed commitment’ by US for science, education, culture

Our reading suggestions this week

Less is more when it comes to cooking

True teachers are remembered, others are forgotten

The French freedom of Expression

The most difficult thing to accomplish is writing a play for the stage: Ruma Modak

Interview: The real-life suspense of Masud Rana and Kuasha

An Interview With Samaresh Majumdar

A man in forty million Bengalis