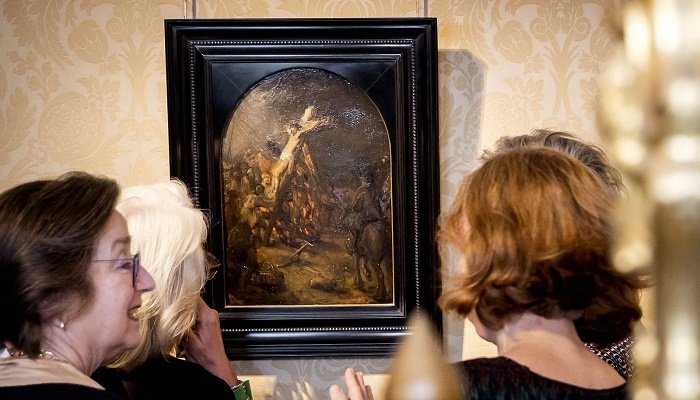 AFP: Art experts in the Netherlands unveiled an oil sketch on Thursday by the famous Dutch master Rembrandt after it languished for a century in a forgotten corner of a museum, believed to be an imitation.

“The Raising of the Cross” oil sketch from the 1640s was long thought to have been the work of a follower of the 17th century master, known for his famous works like “The Night Watch” and “The Anatomy Lesson of Dr. Nicolaes Tulp”.

But now the Bredius museum in The Hague, where the sketch has been on display since it was bought in 1921, has revealed, thanks to new scientific techniques, it was in fact painted by Rembrandt.

“The quality of the details are so well done that I am convinced that this is a Rembrandt,” said Johanneke Verhave, who restored the sketch.

She studied the artwork together with Jeroen Giltaij, former chief curator of old paintings at Rotterdam’s Boijmans Van Beuningen Museum who first “rediscovered” it while doing research for a book on Rembrandt about a year ago.

“I looked at this work again and again. At the brush strokes. They are brilliant,” Giltaij told AFP.

“Just a few broad brush strokes” convinced him the sketch was indeed the genuine article, he said.

The artwork was first bought by the museum’s original curator Abraham Bredius in 1921. He too was convinced the sketch was an original Rembrandt.

But over the years, art experts dismissed it as a “crude imitation”.

Giltaij re-examined the sketch for his “Big Book of Rembrandt Paintings” which features all 684 works by the Dutch master.

“When I was looking at it, I thought Bredius was right. I think this is indeed a Rembrandt,” he said.

One of the main arguments by art experts for the sketch being an imitation was the seemingly undetailed brush strokes on the canvas.

“You have to remember, this is an oil sketch. Rembrandt is usually very precise and refined, but this is very rough,” Giltaij said.

“The reason is the oil sketch is a preparatory sketch for another painting. He wants to show the composition, a rough idea of what the actual painting could look like,” he said.

The sketch also harked back to a 1633 Rembrandt painting also entitled “The Raising of the Cross” which now hangs in the Alte Pinakothek art museum in Munich.

Restorer Verhave said infrared reflectography and X-ray scans were made of the sketch, revealing interesting elements.

“The research shows that the sketch has several changes made by the artist himself while painting, meaning that its composition was a creative process.”

“This means the painter was changing his mind while he was working. He was clearly not copying another painting,” she said.

The research also showed the way the painter handled his brush matched that of the great master.

The two experts’ research was sent to Amsterdam’s Rijksmuseum, which conducted its own analysis.

“Regarding the use of materials, the researchers at the Rijksmuseum however did not find anything to contradict an attribution to Rembrandt,” the Bredius museum said.