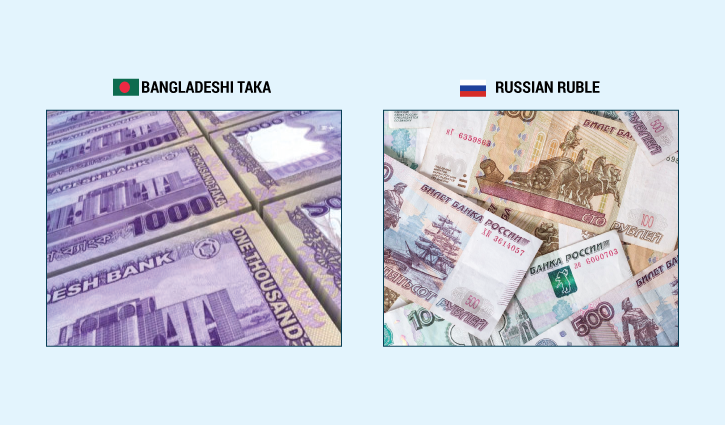 Finance Minister AHM Mustafa Kamal has said Bangladesh and Russia have agreed on a currency swap that will enable them to trade directly in the taka and the ruble.

Dhaka is particularly interested in the import of fuel oils from Russia under the deal.

After a virtual cabinet committee meeting on public purchases on Wednesday, the finance minister told reporters that Bangladesh’s currency taka could be swapped with the Russian ruble while importing oil and other commodities.

He said, “We are also looking for any other alternatives available in the global market for importing various commodities without US dollars.”

Last month, Energy and Mineral Resources advisor to the Prime Minister, Dr Tawfiq-e-Elahi Chowdhury said Bangladesh was looking into importing oil from Russia and there is no objection from the USA. Later, State Minister for Energy Nasrul Hamid said Bangladesh would import Russian oil via a third country.

Analysts, however, are concerned that the government should assess the political and trade implications of the currency swap deal with Russia, which is facing sanctions from the West following its attack on Ukraine on February 24.

Kamal said that it is difficult to curb inflation by only increasing interest rates.

He said, “To control inflation, we do that by applying both fiscal and monetary measures…Bangladesh Bank does that.”

While drawing his attention to the fact that banks in all countries of the world are increasing interest rates on loans, the finance minister said, “The way we have implemented our 9-6 percent interest rate, it has been going well. But, taming inflation by raising interest rates is a difficult task in a country like ours.”

Interest rate depends on the demand for credit and supply of loanable funds, he added.

The minister said, “We will gradually move to a market-based interest rate. I will go for it as I have fixed the cost of funds so far. We need to consider how advanced economies deal with their currency supplies. I will fix it the way they do it”.

“We’re considering floating exchange rates based on market forces. Today or tomorrow, we’ll have to go for market-based trading of foreign currency,” he told reporters while briefing on the outcomes of two consecutive meetings of the Cabinet Committee on Economic Affairs (CCEA) and Cabinet Committee on Government Purchase (CCGP), in the city.

The finance minister’s remarks came against the backdrop of the recent volatility in the foreign currency market as the US dollar recently sold at Tk 106 from Tk 85.

In his bid to reinforce the public psyche suffering from forex depletion, Kamal said Bangladesh’s foreign currency reserves will reach $48 billion soon as remittances and export proceeds have increased in the last couple of months.

He said in the last fiscal year inward remittances aggregated $24 billion which he termed as a ‘good sign’ for an economy like Bangladesh.

The finance minister told reporters that the forex reserves now came down to $38 billion from $48 billion due to large import volumes.

He said exports are gradually increasing against a declining import-trade due to imposition of some restrictions.

Some $2 billion worth of inward remittances came to Bangladesh every month, he added.

“We hope the trend will continue for this fiscal year which is good for the country.”