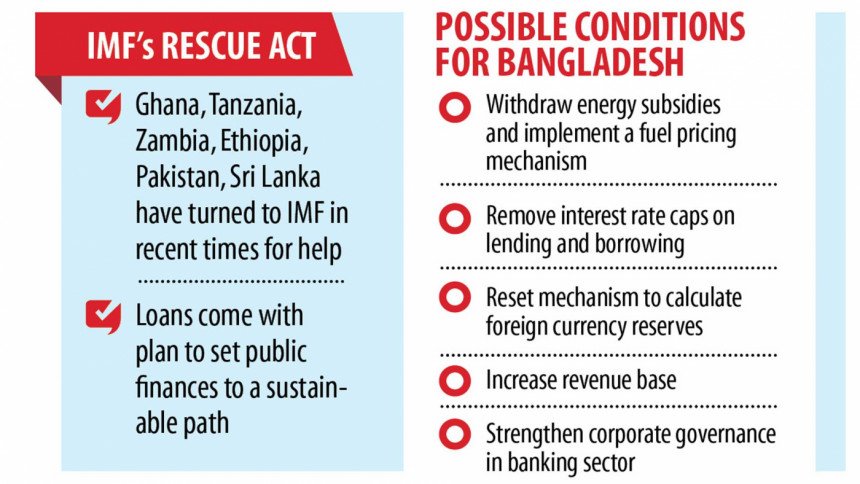 Rejaul Karim Byron, Dhaka: Finance Minister AHM Mustafa Kamal has sent in a formal request to the IMF for a $4.5 billion loan, putting to bed the speculations on whether the country would be seeking the support from the Washington-based multilateral lender at all.

According to documents seen by The Daily Star, Kamal sought the amount as balance of payment and budget support as well as to mitigate the effects of climate change on Bangladesh.

The loan request was made in a letter to IMF Managing Director Kristalina Georgieva on Sunday.

The development means Bangladesh joins a growing list of countries seeking support packages from the lender to help their recovering economies navigate the fallout of the Ukraine war that has sparked rampant inflation at home.

Earlier this month, the International Monetary Fund agreed to provide Pakistan $4 billion over the next year and Tanzania $1.05 billion, while Ghana, one of West Africa’s largest economies, has sought $1.5 billion.

Bangladesh’s need for a balance of payment support comes as the spiralling global inflation has left the country with a bloated import bill for more or less the same volume of goods.

Between July last year and May this year, imports stood at $81.5 billion, up 39 percent from a year earlier, according to data from Bangladesh Bank.

As a result, the current account deficit — which is the shortfall between the money received by selling products to other countries and the money spent to buy goods and services from other nations — widened more than six times to $17.2 billion in the first 11 months of fiscal 2021-22.

This is entirely cost-push, Kamal said in the letter to Georgieva.

In the absence of like-for-like increases in remittance and exports, the two main sources of dollars for Bangladesh, foreign exchange reserves started depleting at an undesirable pace.

Around this time last year, foreign exchange reserves were hovering around the $45 billion-mark. As of July 20, it stood at $39.7 billion, enough to cover 5.4 months’ import bill.

Given the spiralling global inflation, that import cover might end up not being much of a cushion.

At the same time, the inflated import bill means the additional costs were passed on to consumers at home, which caused the inflation to race away.

In June, inflation hit a nine-month high of 7.56 percent, which took the average inflation for fiscal 2021-22 to 6.15 percent, overshooting the revised annual target of 5.9 percent.

The rampant inflation means a cost of living crunch for the poor and hence the need for budget support from the IMF to maintain economic stability and protect the vulnerable.

Of the $4.5 billion sought, $1.5 billion would most likely be interest-free and the remaining amount would come at an interest less than 2 percent, said finance ministry officials informed on the matter.

To begin the talks, an IMF mission is expected in September, when the terms and conditions for the loan will be thrashed out.

By December, the deal is expected to be locked in for placing at the IMF’s board meeting in January, the officials added.

Loans from the IMF typically come with tough reform plans, which often end up being too exacting to implement for many countries.

The conditions that Bangladesh would be subjected to can be gauged from the concluding statement of the IMF staff mission’s nine-day tour to Dhaka that ended last week.

According to documents seen by The Daily Star, implementing a fuel pricing mechanism, removing the interest rate caps on lending and borrowing, resetting the methodology to report on foreign currency reserves, increasing revenue base, and strengthening corporate governance in the banking sector top the recommendations made by the mission.

Removing energy subsidies that cushion prices for consumers remain a key demand of the IMF while negotiating financial packages with countries.

The government would most definitely be pulling back the fuel subsidies, said a top official of the energy ministry informed of the proceedings.

“We are negotiating with the transport service providers such that they do not pass on the burden of higher fuel prices to the consumers. We will make up for this through other ways,” he said on the condition of anonymity due to the sensitivity of the matter.

The cap on interest rates, a phenomenon found only in Bangladesh that broke down the monetary transmission mechanism, would also be lifted as per the IMF’s demand, said a top official of the central bank.

“We are working out if the caps would be lifted for all or certain sectors,” he added.