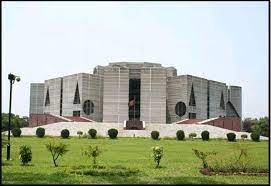 Bangladesh News Desk: Jatiya Party (JaPa) lawmaker Syed Abu Hossain said the state has failed to ensure the natural death of an innocent girl even after 50 years of independence.

“Why is the father afraid of seeking justice to the state?” the lawmaker asked adding the state has to answer it.

Syed Abu Hossain on Wednesday came up with this remark while addressing a point of order in the parliament.

Recently, a college girl Samiya Afnan Jamal was shot dead by the miscreant at Aamtala Masjid area in the capital’s Shajahanpur area. After the incident, Samiya’s parents said they don’t seek justice [over the death of their daughter].

Over the issue, the lawmaker gave a speech to the parliament and felt ashamed as a parliamentarian. He said she was not involved in politics. So what was her fault?

Terming the killer as the predator, the JaPa leader said the exemplary punishment will have to be ensured for these predators. Otherwise, all development and progress will be wasted.

He urged the prime minister Sheikh Hasina to control them with iron hand.