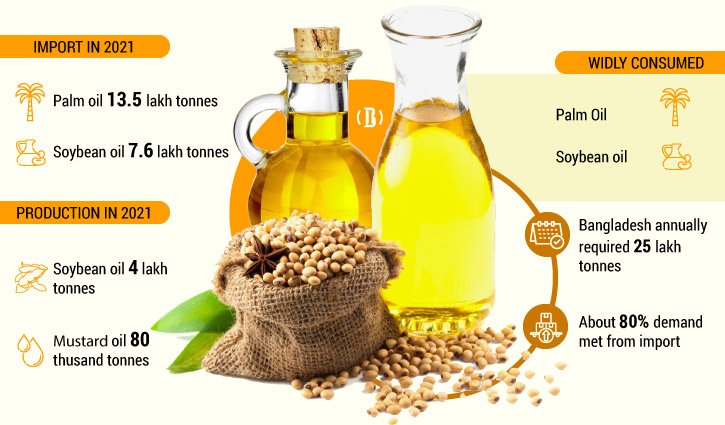 Mehedi Hasan: Kamrul Hasan, an executive of a private company, lives along with his four-member family in the capital’s Mirpur area. He needs five to seven litres of soybean oil per month. But, he could not buy all that he needed as cooking oil got scarce in the month of Ramadan.

“Leaving office, I came to Kawran Bazar wholesale market on my way home to buy some soybean oil. I failed to buy it yesterday, too,” Hasan told the Business Insider Bangladesh while he was strolling in the market after failing to buy soybean oil, the price of which flew way too high for him to catch, on Tuesday afternoon.

He said he visited all wholesale and retail shops that came to his eyesight in the market but could not buy a bottle of it.

“I saw, there are soybean oil at some shops but the shopkeepers told me they are not selling them. And, even if some of the vendors agreed, they put a string that I need to purchase other products together with the oil,” Kamrul said.

He said one seller told him that he would sell a 5-litre bottle at Tk 1,150 if “I purchase an additional one litre of mustard oil. Now, I am returning home empty-handed.”

A few days ago while visiting Swapno retail store located at Mirpur-2, the gentleman saw there was no crisis of soybean oil but the consumers were turned down.

The stock of the edible oil has diminished, and that’s why Swapno were refusing to sell the cooking oil, Kamrul said, quoting a sales representative there.

While talking to the Business Insider Bangladesh, retail and wholesale shop owners claimed that there had been no supply of edible oil from the companies for the last one week. The dealers are not supplying oil even after submitting orders, they added.

But it was seen on Tuesday that the chain store operators were carrying truck-loads of oil to their respective stores.

Seeking anonymity, a representative of a chain shop, said there is no oil at his shop at this moment, and he is buying oil from Kawran Bazar at a retail rate to meet his customers’ demand.

Babul, the owner of Mayer Doa General Store, said he recently placed an order before Teer Company but they said they ran out of stock.

Besides, while visiting some grocery shops in Savar, on the outskirts of the capital Dhaka, the Business Insider Bangladesh reporter hardly found any soybean oil there.

But some shops were seen selling a five-litre bottle of soybean oil at Tk 800 that triggered altercations between the shop owners and the buyers.

Some consumers said they had to buy one packet of tea with 5-litre bottled soybean oil as a combo deal.

Mostafa Kamal, chairman of Meghna Group of Industries, told Business Insider Bangladesh that the prices of edible oil have increased in the international market.

“We will have to count a huge financial loss if we continue marketing the edible oil at this moment,” he said.

While responding to a question, he said it is impossible for them to sell per litre of oil at Tk 160 after purchasing it at Tk 190 from the international market. In addition, the container tariff and price of dollars have gone up, too, he added.

Bangladesh has an annual demand for some 25 lakh tonnes of edible oil of which 80 percent is imported.