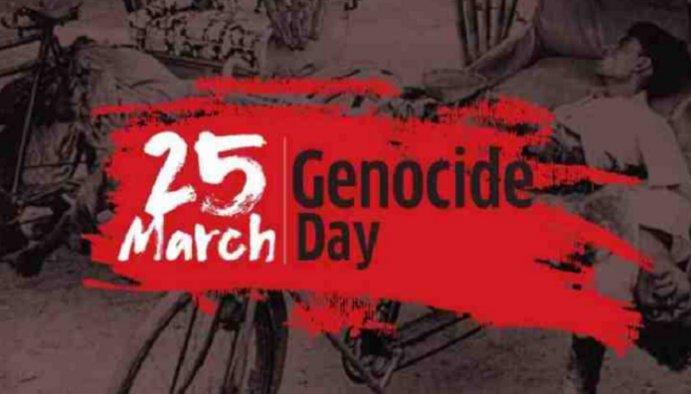 UNB: Bangladesh will observe ‘Genocide Day’ on Friday, to commemorate brutalities of Pakistan army during the Operation Searchlight they had launched on the night of March 25 in 1971, as a last resort to try and suppress the will of the people of what would become, in less than nine months, an independent Bangladesh.

Organisers have called for a nationwide symbolic one-minute ‘Black Out’ and silence at 9 pm on Friday to pay respect to the independence martyrs.

On the Black Night of March 25 in 1971, the Pakistani military junta resorted to mass killings and arson in Dhaka to implement their blueprint to thwart the Awami League’s assumption of office following the election mandate of 1970.
In the attack dubbed ‘Operation Searchlight’, the Pakistani forces mercilessly killed the Bangalee members of the East Pakistan Rifles and police, students, teachers and common people.

They killed people indiscriminately, set fire to the houses and property and looted business establishments, leaving a trail of destruction.

The night also witnessed Bangabandhu Sheikh Mujibur Rahman’s proclamation of independence before he was arrested by the Pakistani troops and subsequently flown to West Pakistan.

The day is being observed as Genocide Day officially for the sixth time in the country since the Parliament unanimously adopted a resolution on March 11, 2017.

The president said “The observance of Genocide Day is a recognition of the great sacrifices made by three million Bengalis in the liberation struggle of Bangladesh.”
It is also a symbol of protest against the genocide committed by the then Pakistani aggressors.

“The horrific genocide of 1971 is a black chapter not only in Bangladesh but also in the history of world humanity. The pledge that such genocide does not happen anywhere else will be reflected worldwide through the observance of the Genocide Day” he said

In her message, the prime minister said that genocide, oppression, and other humanitarian disasters are still happening in some parts of the world.

“I believe that by following the ideals of peace enunciated by Father of the Nation Bangabandhu Sheikh Mujibur Rahman and avoiding all forms of discrimination, communalism, and colonialism we can build a peaceful world order”

The PM called upon the people to unite for building Bangabandhu’s Sonar Bangla in the spirit of the War of Liberation and following his ideals.

Political parties have taken up programmes in observance of the day.