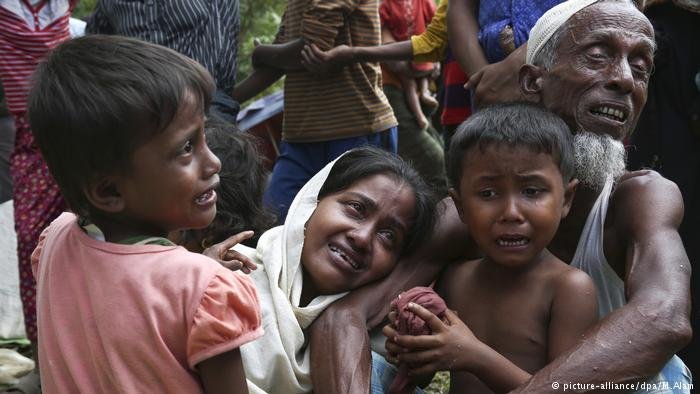 The international community, especially Bangladesh and most Western countries, have been struggling to handle, control and solve the Rohingya issue by spending massive human and material resources for the past few years. But it does not seem that the issue will be resolved in the coming years. It may even become a bigger issue with more negative impact on a regional and global scale.

Given the current political crisis in Myanmar and the situation of global instability coming out of the Russo-Ukrainian war and other issues, the fate of the Rohingya community has become more hopeless and worrisome. What happens if the thousands of Rohingya people decide to take up the issue of their rights in a more violent and radical way, with some external support under strong leadership, with the purpose of forming a homeland along the Eastern Coast of the Bay of Bengal between Chittagong and Sittwe? Obviously, this is unwarranted not just for Myanmar and Bangladesh but also for the international community because this could lead to a more violent and extreme outburst.

The previous generations of 1980, 1990 and 2000 in Arakan from both Arakanese and Rohingya communities did not expect the 2012 communal violence despite some grievances and inhospitality due to the racial and religious differences. In many parts of Rakhine State before 2012, Arakanese and Rohingya students went to school together, played together, and enjoyed each other’s festivals though they may have some arguments over religious beliefs. But this is nothing special if we compare it with other parts of Myanmar where religious and ethnic diversity also exists. At that time, Arakanese youths referred to “Rohingya” as “Kalar” while “Rohingya” people called the former “Rakhine”. The debate about “Rohingya identity” also existed only in a small circle of political and academic elites, but in general people, they did not participate.

Only after the events of 2012, the identity issue became a hot cake and the demand for identity recognition by the Rohingya community is also becoming more structural and politically motivated. The Arakanese community and the central Burmese government responded severely.

Dark Side of Liberalisation?

The key question here to be raised is “Why did the communal violence in Rakhine State only happen in 2012, not in 1992 or 2002? Many people may think it is due to the political manipulation by the political elite without having to do anything with the ordinary people. But it is only a part of the story and the real motivating factors that push toward such violence include changing the game of politics toward electoral politics, rising identity politics and awareness under a more open situation, and finally, a blocked political future for both communities. But it is important to note that such communal violence broke out not just due to the changes happening in socio-political structures but due to the lack of state structure that can adjust to such changing situations. In theory, when the capacity of the state is unable to adapt to the rising political demand and mobilisation, it leads to political chaos and instability. The 2012 event of communal violence was exactly the result of this phenomenon, and therefore, finding a comprehensive and tangible solution to the Rohingya issue needs to be considered a structural question.

Quite obviously, the later version of Rohingya conflicts become more like “State versus Community” rather than an issue coming out of a communal level identity clash. The events of 2016 and 2017 were the obvious thermometers of this trend. Until now, a large volume of Rohingya people is still in the refugee camps in Bangladesh and their hope of returning home is becoming more difficult.

Arakan was conquered and colonised by the Kongbaung dynasty of Burmese Kingdom in 1784 and this historical juncture still causes many Arakanese people one of the most miserable and shameful events in their history. Since then, many external powers and regimes including the British and Japanese have come and colonised their land while exploiting the resources and marginalising their right to self-rule and culture. The independence of Burma in 1948 was marked as the fourth phase of colonisation of their land and people by Arakanese nationalists.

Today, there is no higher cause and end than this sense of legitimacy for the rise of the Arakan Army in Rakhine State, and of course, the leadership of ULA/AA has claimed that they have reached the third stage of revolution (the final and fourth stage is about total out-casting the existing Burmese rule in Arakan) while having control over nearly two-thirds of Arakan territory and population. Thus, it is also safe to argue that this situation clearly has an impact on the question of the Rohingya issue in Arakan. Currently, it seems large segments of the Rohingya community (especially those people outside of the State) still have a doubtful perception of the ULA/AA leadership and policy toward them and it is also reasonable given the fact that there are many historical grievances and pessimism among each other. But it is also unavoidable for the Rohingya community to have a close relationship with ULA/AA leadership if they have a serious political agenda for peaceful coexistence and harmonious society in Arakan. That is, of course, true for the ULA/AA leadership as well.

Currently, the Chairman of ULA has claimed that they recognise the human rights and citizen rights of the Rohingya community despite having some undecided thoughts behind the identity politics of ‘Rohingya”. At the same time, ULA led administrative mechanism like Arakan People`s Authority (APA) is trying to promote the degree of social cohesion among the various communities under their control in Arakan, especially between Arakanese and Rohingya. But, it also seems that the ULA leadership still does not have enough capacity to handle the case alone though they may have some degree of political will to be a harmonious and peaceful Arakan society. Thus, they are now still focusing on the process of consolidation and concentration of more power in the Rakhine State. On the other hand, some key leaders of the Rohingya community also need to be pragmatic and constructive in thinking about the future of their community. In short, talking more about a new place in the coming Arakan society beyond the complicated and uncontrollable national politics might be quite welcoming for all communities in Arakan.

What does a new approach to the Rohingya issue mean?

The international community, mostly Bangladesh and Western countries, set up various kinds of approaches to the resolution of the Rohingya issue and among them, pushing the agenda of citizenship and human rights protections for the Rohingya community, are the key components. But it does not make the case better and the HR violations across Myanmar are becoming more increased after the military coup in 2021. The Rohingya community inside Rakhine State is also still heavily restricted to the right to freedom of movement and many young children and women also get arrested very often in hundreds monthly. This task is particularly carried out by the current military led SAC government in Rakhine State as the key communication channels like cars, boats, ships, and airplanes are still under their control.

Meanwhile, the current State Administration Council (SAC) does not seem to have either political will otrthe capacity to solve the issue. Even if they sometimes talk about the repatriation program of Rohingya people back to Arakan, it is nothing more than an effort to achieve the regime’s legitimacy from the international community.

On the other hand, despite the policy declaration of the National Unity Government (NUG) seems to be quite progressive and constructive for the future of the Rohingya community, it will only be more possible and realistic after the entity has achieved a tangible level of de facto power on the ground. Currently, the State of Arakan has a relatively very low level of People’s Defense Force (PDF) movement which is loyal to the leadership of NUG. Even if the NUG can come into power after the defeat of SAC in national politics, it is the ULA/AA that is still the most powerful actor in the State of Arakan.

As long as the power struggle between the two Burmese led blocks continues, the current situation of the Rohingya community will remain the same or even become worse in the future. At the national level politics, the issue of regime change from a military regime to a democratic system will still be the top (and first) priority while the peace process with Ethnic Armed Organizations (EAOs), is the second. Thus, for the great majority of the population and key political actors, the Rohingya issue will still be the fourth priority after economic development or just a small border issue though the community is under severe disaster. So what is the way to get out of that?

The international community needs a new approach which is comprehensive and sustainable for the future.

First, we need to know that the political climate of Arakan is somehow distinct from central Burmese politics and so, the current first priority of Myanmar politics does not have a great impact on Arakan political change.

Account of that, secondly, the region of Arakan has only two important political issues such as the armed struggle of ULA/AA with the Burmese army and the question of the Rohingya community in Arakan.

Thirdly, although the international community used to approach the peace process with EAOs and the Rohingya crisis as two separate agendas in the past, it is quite an inappropriate approach for the State of Arakan given the two issues are interlinked to each other not just structurally but also psychologically.

Due to that inter-dependency, fourthly, the international community needs to have a comprehensive agenda on how the political autonomy of the Arakan region should be elevated while considering the group and citizenship rights of Rohingya people.

Finally, they should also be brave enough to push for a new politics in the region of Arakan, (that can be separated from the trend of central Burmese politics) which produces a balanced and shared power structure among the various ethnic groups in Arakan.