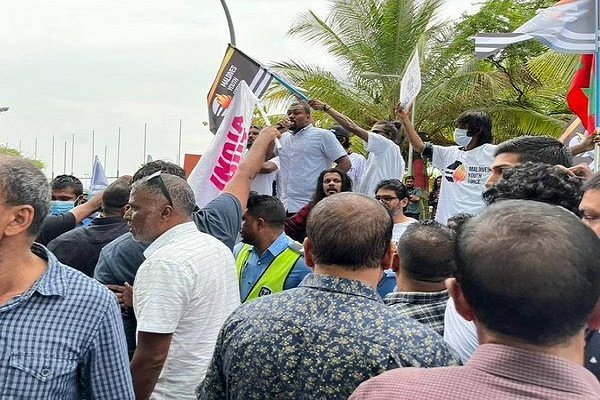 Male [Maldives]: A group of Maldivian youth demonstrated in front of the residence of former President Abdulla Yameen who is running an anti-India “India-Out” campaign.

The protest has rattled the opposition party Progressive Party of Maldives (PPM) and Yameen himself.

Within a week after they launched the movement in the name of Maldives Youth Force MYF, the opposition party PPM has come out with a series of press releases and press conferences against this young movement.

All these days Yameen and PPM have been running the India Out campaign unopposed since the ruling party Maldivian Democratic Party (MDP) is busy with their internal rivalry politics.

This young movement has activists from MDP and supporters of former Vice President Ahmed Adeeb’s party Maldives Third-Way Democrats (MTD) that has publicly opposed the “India Out” campaign.

But Yameen and PPM have been organizing protests all over Male, creating hate against Indians with hate speech, and racist remarks. They have been repeatedly protesting outside the residence of the Indian High Commissioner in the Maldives and harassing high commission staff with false propaganda with personal attacks on their owned media with so many lies and threats every day.

Yameen and PPM have created so much hate against Indians that even Indians who are working in the Maldives are harassed, threatened and they don’t feel safe anymore in the Maldives. Source: ANI