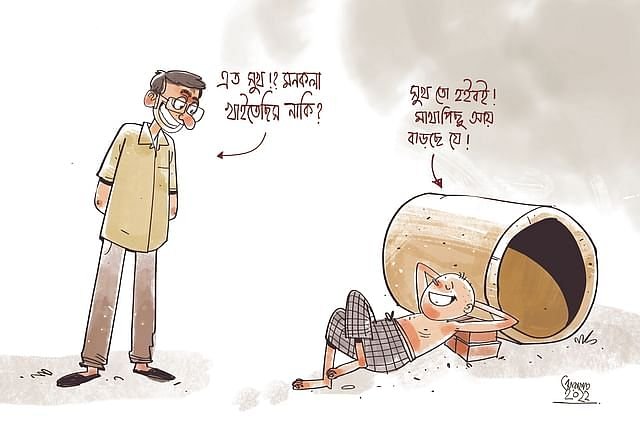 According to recent news reports, Bangladesh’s per capita income has crossed 2,500 US dollars. Economist Zahid Hossain has questioned the veracity of this calculation. Even the common people are skeptical. Why are people so dubious about this? Let me discuss this in light of a recent visit to Sandwip.

I hadn’t been to my village for three long years. My uncle is here from Houston and he hasn’t been to the village for 37 years. He asked me to accompany him and I agreed, despite the Omicron risk.

Travel troubles
There is no direct route to Sandwip from the capital city Dhaka, not even from Chattogram. You have to travel from Dhaka to Chattogram, from there to Kumira ghat and then cross the sea to Sandwip. We decided to fly to Chattogram and then go by road to Kumira ghat. We bought the tickets in advance as that was more cost effective. We chose the morning flight so we could spend more time in the village.

The day before our trip, my cousin gave us a phone call, “Find about the tide before you start off from Kumira ghat.” He and his wife had already reached to Sandwip to prepare for our visit. I asked, “Why, what’s wrong?” He said he had started out during low tide and had to disembark the speed boat straight into the deep mud. His wife’s feet got stuck in the mud. He laughed, “Just imagine, I had to pull her feet out of the mud in front of the huge audience on the ghat!” He was more worried about his male ego that his wife’s feet!

We planned to leave by the first flight and reach Chattogram by 9:00am, go directly to Kumira ghat at 10:00am and then take a speedboat to reach our village by 11:00am. We found out that there would be no high tide before 2:00pm so we decided on an unscheduled break in our journey in Chattogram and then reached Kumira ghat at 2:00pm. The jetty there is around one kilometer long. Some travel the length by rickshaw-van and those who can’t afford that, walk with their bag and baggage. We climbed into the speedboat, with no roof or lifejackets. It was high tide and the waves were choppy. Some of the women with us were praying aloud. Anyway, we managed to reach Sandwip’s Guptachhara ghat safe and sound. There was another kilometer walk from the jetty, lucky enough there was no mud.

Our home is around 12 km from the ghat. It took us an hour down the empty road to reach by CNG. The concrete road was broken in many places and it was quite a rough and painful ride by CNG. But when we finally reached home by 4:00pm and offered prayers at the graves of our forefathers, all our sufferings melted away. We were engulfed with a sense of peace.

Winter, needless to say, is the best time to visit Sandwip. In the rainy season, the travellers face indescribable sufferings. Yet even in the sixties we could travel in just 15 minutes to Sandwip from the helipad south of Niaz Stadium in Chattogram. Or you could watch the seagulls if you travelled by a big steamer down the river from Sadarghat in Chattogram to Sandwip. A jetty has been constructed at the cost of Tk 430 million (Tk 43 crore) next to the jetty that had previously been constructed at a cost of Tk 70 million (Tk 7 crore). But the people of Sandwip are still not guaranteed a safe trip to Sandwip, free of mud and sufferings, in any season of the year. It is very clear here that financial expenditure does not necessarily equate to development.

”Alas, politics! Even when it comes to power connections, your affiliation with BNP, Jatiya Party and so on is taken into consideration. The AL candidate ‘won’ in the election. I hope the Harishpur people will now get electricity”

Power connection thru submarine cable
The biggest piece of development news for Sandwip is the power connection in November 2018 by means of submarine cable. The electricity is being used for household purposes, like fridges and air conditioners. It has been three years since then, but no industries have been set up there. Unless the problems in communication are resolved, there will be no investment in Sandwip. And yet so many people of Sandwip, migrants in the US and the Middle East, are eager to invest there.

”No one lives in these homes. These remind me of the Londoni houses in Moulvibazar. These houses built at huge costs will add to the GDP, but who is benefitting from all this?
Ailing health sector”

As you emerge from the ghat and walk for a bit, on the left lies a costly but abandoned sea ambulance. Yet this is indispensable for the people to survive on this remote and isolated island. The three-storey health complex at Kalapania union looks abandoned from the outside, but we found out that a physician and a compounder was supposed to visit the complex thrice a week. But the place has been closed for a month due to the lack of physicians and assistants. There were no awareness posters about the pandemic around the health complex or anywhere else. Yet I hear that while we were there in Sandwip, the UNO and the MP’s families were all affected by corona.

Buildings rise with remittance
As you leave the ghat you can see many brick kilns (which I hadn’t seen there before) and a huge hoarding advertising rods of a famous steel company. This indicates the extensive construction going on all over. A Bangladeshi US-resident has even constructed a building near my grandfather’s homestead too. I saw tiles being set along the boundary wall. No one lives in these homes. These remind me of the Londoni houses in Moulvibazar. These houses built at huge costs will add to the GDP, but who is benefitting from all this?

Bare expanses
Last time I had seen vast expanses of bare land with no crops, no vegetation. This time I noticed there was more vegetable cultivation. One kg of coarse rice cost Tk 35. It takes Tk 400 to send 10 kg of rice by local transport and courier to Dhaka, meaning Tk 40 per kg, which is higher than the product price. That is why everything comes from outside and the price of everything is exorbitant. How can a farmer cultivate crops and why will he? A day labourer’s wages are Tk 600 and he doesn’t even get work every day. How do those who do not receive remittance from abroad, survive? How do their sad days pass? Who knows?

Citizens’ initiatives
Along the west and north coasts of Sandwip, a few thousand acres of land has risen up from the sea. These emerging chars are a beacon of hope to those who lost their lands to river erosion. But this is also a source of apprehension too. The people here were enraged that Bhasan Char, Swarnadwip and parts of Urir Char which had arisen in the eroded Namasti union, was not included with Sandwip. So instead of waiting for the government this time, they have used their own resources to start constructing a road connecting Kalapania and Batajora to make sure the chars are not snatched from them. They are determined to retrieve the lost land of their forefathers.

The state minister for planning is known to be a good man. He is leading the Delta Plan. Will he get the time to pay a visit to these endangered islands? A study of the profit and loss in public investment indicates that investment should be made where costs are low and profits are high. If such investment is made for a bridge connecting Sandwip and Chattogram, returns will be manifold due to private investment. He will also be able to monitor any waste in public investment.

Above all, the people of Sandwip are also people, citizens of the country. Other than merely being a part of the per capita income statistics, they have a right to basic healthcare and at least two square meals a day.

* Muhammad Fouzul Kabir Khan is a former secretary and a professor.