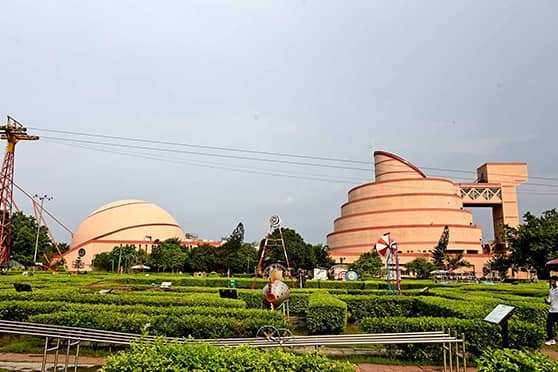 DEBRAJ MITRA: Nuclear power, conceived as a possible source of low-carbon and affordable energy, is also a tool of destruction, a classic example of misuse of innovation. Despite being hazardous to the environment, fertilisers are popular among Indian farmers because they increase crop yield.

A science seminar in the city on Thursday saw topical presentations from students from all over the country. Science Seminar 2022, held at Science City, saw presentations from over 30 school students, from across India. The topic of the seminar was “Basic Sciences for Sustainable Development: Challenges and Prospects”.

“Nuclear energy was conceived as a low-carbon form of energy that can supply the world with affordable electricity. Now, it is one of the most fearsome tools of destruction. This is a classic example of misuse of scientific innovations,” said Nihala Donnakage, 15, from Lakshadweep. She talked about the need to protect coral reefs.

The Andaman and Nicobar and Lakshwadeep islands are among the major reef regions in India. Global warming, pollution, mining, large-scale fishing and uncontrolled tourism are taking a toll on the reefs. Lakshya Jain, 14, from Jaipur, explained how socio-economic reality often took precedence over environmental factors.

“Let us talk about Raju, an average farmer who wants to use manures instead of fertilisers. Manures are more sustainable in the long run. But in the short run, fertilisers are cheap and increase the yield. People like Raju, with many mouths to feed and tonnes of debt, need maximum produce,” said Jain.

On Thursday, students from places as diverse as Kashmir, Rajasthan, Arunachal Pradesh and Puducherry gave presentations. The National Council of Science Museums has been organising the seminar since 1982. “There is going to be one winner and several other awardees. But to me, every participant who came this far is a winner,” said Anurag Kumar, director of Science City.