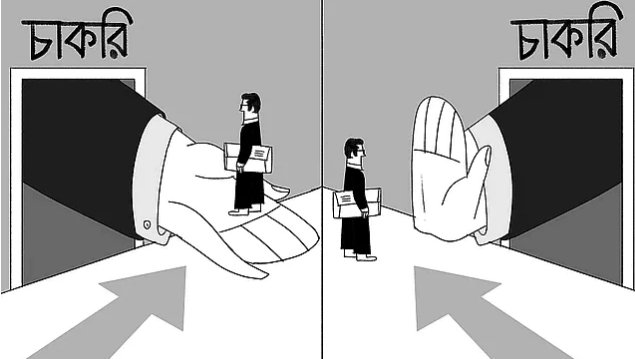 There is unemployment in all countries of the world and in Bangladesh too. Actually, in the capitalist system, it is neither desired nor possible to completely eliminate unemployment. According to the Bangladesh Bureau of Statistics and other sources, the rate of unemployment in Bangladesh is more or less around 5 per cent. This is not that high in comparison to many countries around the world. However, in certain sections of the workforce, particularly among the young and the ‘educated’ youth with college and university degrees, this rate is relatively higher. Salman Rahman quite correctly said that the youth with unnecessary university degrees are not getting jobs.

The fact that a bunch of numbers does not necessarily reflect reality has actually been proved by a survey run by a government institution. The number of underemployed people in the country is 13.8 million (1 crore 38 lakh), of whom 30.6 per cent are employed in agriculture and 24.1 per cent in the industrial sector. The General Economics Division of the planning ministry conducted this survey. Underemployed means when a person’s employment is inadequate in terms of working hours, earnings, productivity and use of skills. And it can be said with certainty that the situation did not improve in the two years of the Covid pandemic.

There are a couple of other factors that perhaps have not been taken into cognizance. One, there are innumerable battery-run three-wheelers in the small rural town of Raipura upazila sadar (a common picture all over the country). While riding in the vehicle, I asked, “How are your earnings?” The reply came, “It was good before, but now the number of vehicles has increased multiple times, passengers haven’t.” The income which one driver should have been receiving, is now being shared among two or three. And an additional fallout of this is traffic congestion all over.

Two, where three or four vegetable and fruit stalls and grocery stores would suffice, there number of shops has increased three to four fold. In capitalist theory, the increased competition should benefit the consumers, but in actuality it is quite the opposite. They have to charge their limited number of customers to cover the costs of their shop rent, extortion money and their own living expenses. Since there is no scope to sell more with lower profit, they sell less with higher profit. All this has come about due to the lack of alternative means of employment. Is this not a form of underemployment? Economists say much of our growth is by not creating employment.

Also, according to the statistics bureau, only 58.23 per cent of Bangladesh’s able population (15 to 64 years) is employed or unemployed. The remaining 41.77 per cent are outside of the labour market. Needless to say, a large section of this is women. In the case of the developed world (OECD countries), these figures are 72.8 and 27.2 per cent respectively. It should be examined as to whether the lack of appropriate work is keeping this huge workforce outside of the labour market.

To explain why agricultural workers can’t be found to harvest the rice crop, one must go back to the education system. The boy who has got a degree from the village or small town college without learning anything, will find it below his dignity to work as agricultural labour, even though it will give him a daily wage of Tk 600 and three square meals. Then again, he does not have the competence for any work that goes with his degree. So he idles away his time in the village teashop, hoping to manage enough money so he can pay the bribe needed to get a job as a peon in a government office. Or he dreams of crossing the Mediterranean to go to Italy for a better life.

The unnecessary degrees which are being referred to, are mostly being meted out by the institutions of higher education running on government grants or with government approval. It was recently learnt that most of the PhD degrees being churned out from Dhaka University were in Bangla literature and religious studies, which have very little potential of practical use. Bangladesh has no contribution in the basic sciences, technology, medical science (the agricultural scientists being an exception).

”The railway bridge infrastructure being built across Jamuna River is being made in Vietnam and Myanmar. Myanmar is able, we are not.”

There was a time when boys and girls from Malaysia would come to Bangladesh to study, now things have reversed. Malaysia is now a large manufacturer of semiconductors. Huge consignments of electronic goods, even cars, come to Bangladesh from Malaysia. They come from Vietnam and Thailand too. Of course, nowadays fridges and TVs are being made in Bangladesh too, but most of those are just being assembled here. The railway bridge infrastructure being built across Jamuna River is being made in Vietnam and Myanmar. Myanmar is able, we are not. We are thrilled at being the second largest factory to stitch garments. We are complacent at exporting construction workers at the highest cost for the lowest wages. Bangladesh must break out of this trap of complacence.

The biggest harm brought about by underemployment is that a worker spends the most productive time of this life working less than his potential and wishes, and earning less too. If the dream of being a ‘developed country’ by 2041 is to be achieved, then the actual earnings of the general people must be extensively increased. This target cannot be reached by calculating a 12 per cent increase in per capita income with 6 per cent growth including inflation. The year 2041 may still seem far away, but 19 years is not a long time. No country has been able to graduate from a lower mid income country to a high income country within such a short span of time. If Bangladesh is to achieve this impossible goal, it must certainly halt this waste of opportunities and the potential of this huge number of workers.