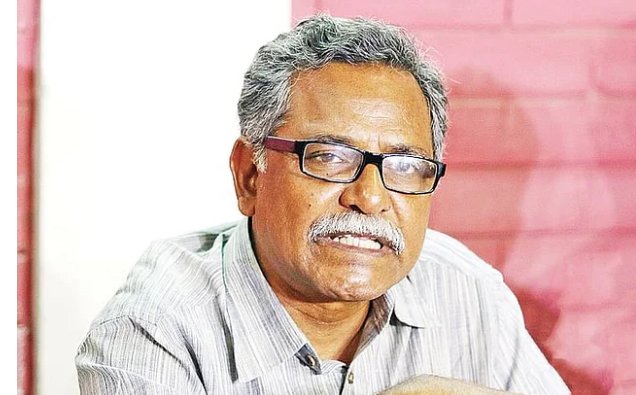 Anu Muhammad is a professor of economics at Jahangirnagar University and editor of Sarbajankatha. He has long been member secretary of the National Committee to Protect Oil, Gas, Mineral Resources, Power and Ports. He has authored over 40 books on economy, politics, social development and various issues. In an interview with Iftekhar Mahmud, he speaks about various aspects of economy, politics, social development and more.

Question: How did you find the budget this time?

Answer: A budget does not give any new guideline to the economy of a country. A budget comes around every year as part of the economic planning, policies and vision by which a country is run. So we shouldn’t expect the budget to come up with anything new. This budget has provided us with a reflection of the class which this government represents, of the vision by which it is run. This is manifest in two basic areas. One is where the government procures its resources or funds from, and the other is where it spends this. A lot can even be understood from observing which country the government is becoming dependent on for its foreign fund transactions.

Accordingly, we see that the government is targeting indirect taxes as the main means of acquiring resources. We pay the government taxes when purchasing various products and spending. The government has made this indirect taxation a major target of the budget. Then there is income tax as well. In this case too, we see that basically it is the majority poor and middle class that are paying these taxes. Again, the wealthy class in the country are less in number. However, as always, this budget too has plans to spend the most funds in their interests. So this budget’s economic vision has nothing new to offer.

Question: How will you evaluate the expenditure sectors of the development budget?

Answer: The biggest reflection of the government’s vision lies in the development budget. For example, the education sector is most important for the majority of the people. Investment in this sector can yield the best results. Yet we see, as in budgets of the past, there is very little allocation in this sector. It is the government’s responsibility to make education easily accessible to the people and to ensure quality education. In ratio to the GDP, allocation for education in Bangladesh’s development budget is the lowest in South Asia, the lowest in the world.

It is the same with the health sector. For two years the government has been allocating huge funds to the health sector. A large amount of this is being spent on vaccines and purchase of equipment. But there is a serious lack of transparency and accountability in the case of procurement. We have seen the health directorate taking loans from the World Bank and procuring all sorts of useless equipment from various countries. The equipment lay in the airport for long, rotting, and initiative to collect and use this equipment was only taken after the matter was flashed in the media. The heath sector should be seen as a right of the people. We have not viewed it in this way. This budget has not given much allocation to the basic healthcare of a large section of the population, their medical treatment and essential drugs.

Question: There are allocations for infrastructure and mega projects again this time.

Answer: This government has been focusing on large projects ever since it took over power. It claims that these projects have been taken up in the interests of the common people and that these are being funded by the World Bank, ADB and such institutions. But the funds taken from these institutions, at the end of the day, are paid from the people’s taxes and incomes. And the reality is that these projects come to no use of the people. Quite to the contrary, these are a tax burden on the people. Projects like Rampal next to the Sundarbans, Rooppur in Pabna and the Payra coal-fired power plant at Patuakhali eventually go against the people’s interests. Projects like these are creating irreparable loss to the Sundarbans, which is such an invaluable natural resource of the country. In this budget too the government has made allocations for mega projects which will not benefit the people, but in the long run, pile up burdens on their shoulders. For example, one lakh crore taka is being spent on a 2000 MW power plant. Though the funds are being provided by Russia, it will be collected from the people along with interest. These risky projects are damaging the environment and increasing the risk of accidents.

Answer: It wouldn’t be a problem if infrastructure was developed in keeping with the country’s economic condition and requirements. In reality we see that our costs of infrastructure development are higher than India and China, in fact, the costs are even higher than in the US or Europe. Whether it is bridges or roads, our spending in all sectors is exorbitant. So if theft and corruption takes precedence in infrastructure construction, this will come to no use of the people.

Given Bangladesh’s geographical nature, importance should be paid to the railway and river routes. The river routes have halved since independence of the country. Railway routes were not given importance either. On the contrary, extra taxes were loaded upon railway travel. Ever since independence, all the governments have increased allocations for the road routes. Road routes have increased a few thousand fold, but there has been much criticism about the quality of the roads, the expenditure involved and corruption.

Question: There has also been a lot said about domestic and external debt.

Answer: The government so far has taken around one lakh crore taka in loans from domestic sources, that is, local financial institutions. The remaining one and a half lakh crore taka has been taken from foreign sources and this may increase while the budget implementation proceeds. A large chunk of these loans have been taken for mega projects. Tax burdens have been increased in fresh areas in this budget in order to repay these debts. Allocation hasn’t been made in many important areas. For example, just before declaring the budget, the price of gas was pushed up. As a result, electricity and industrial products’ costs will go up. We have seen the price of edible oil going up after the budget. So, at the end of the day, money from the people’s pockets is going to the hands of the government. And the government is wasting this on mega projects.

Question: It is said that the country’s per capita income is increasing.

Answer: According to official records, the per capita income of the country is 2800 dollars. And according to the latest data of the government’s household survey, 25 per cent of the people’s income is less than 20,000 taka. Outside of this huge population, most of the money is in the hands of a small group of people. The government is making budget allocations in their interests, is taking up big projects. And from there the wealthy people are siphoning off their money abroad in the guise of import and export.

In this budget the finance minister has given scope to bring that laundered money back into the country. He declared that these funds can be brought back into the country with the payment of taxes lower than the normal income tax rates. Normally people who have sneaked their money out of the country, are not likely to bring it back. A certain class of people does not feel safe keeping their laundered money in the country. The finance minister has declared special facilities for them to bring this money back. If money has been laundered, there will be no penalty. Quite to the contrary, they will be able to avail special facilities.

Question: How far do you think this budget will be effective in generating employment?

Answer: The budget talks about creating a directorate to create employment. But this does not require any directorate. Over the past few years, not only did the government fail to create employment, but it has ruined the employment of a few lakh people. During the corona outbreak, 25 jute mills were closed down. One sugar mill after the other was closed. Yet we calculated that all the jute mills could have been restarted with an investment of 5000 crore taka. This would have created employment for a few lakh people.

It is possible to employ around four and a half lakh people in various sectors of national importance such as teachers in educational institutions, nurses and physicians in hospitals, and in the fire service too. This will benefit the people and strengthen the economy. There are no allocations or guidelines about this in the budget. Given the vision and planning of this government, it is only natural that we get such a budget.