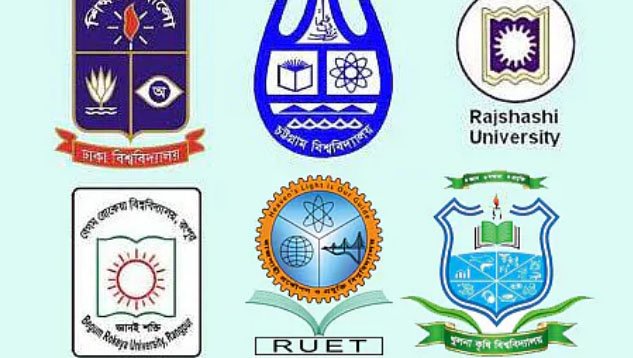 Mustak Ahmed, Dhaka: The vice chancellors of the various public universities in the country face a continuous volley of allegations, sources at the University Grants Commission (UGC) have said.

UGC, a regulatory body for the public and private universities, have recently begun investigations into various irregularities in 18 universities.

These include allegations against 12 incumbent and former vice chancellors. So far inquiry reports on 13 issues of these 18 universities have been submitted and investigations into five are still underway. However, no action has been taken against a single one of the vice chancellors so far.

According to a member of UGC and other educationists, it is not just shameful that there are such irregularities and misdeeds among persons in such prestigious positions as vice chancellors, this is criminal too. If this is to be rectified, the existing system of appointing vice chancellors must be changed.

Secondly, if irregularities still crop up, immediate action must be taken. They said that most of the irregularities are taking place in recruitments and infrastructure. These areas require more transparency and accountability.

There are presently 52 public universities in the country. These universities (without the colleges) have around 1,175,000 students and 15,500 teachers.

The latest allegation has been brought against the vice chancellor of Rajshahi University of Engineering and Technology (RUET), Rafiqul Islam Sheikh. He has been accused of resorting to nepotism appointing his brother-in-law, two brothers, his wife’s cousin, his cousin, his house help and her husband and other relatives as officers and employees at the university.

According to an inquiry report of UGC submitted in February, the vice chancellor of Khulna Agricultural University, Shahidur Rahman, resorted to irregularities and nepotism in appointing his son, daughter, brother-in-law and sister-in-law’s son and nephew to the university.

He even tried to appoint his wife as a professor, but this was blocked before he could actually make the appointment. The vice chancellor admitted his ‘wrongdoing’ to the inquiry committee, but no action was taken against him. Quite to the contrary, even on Thursday he attended and addressed a UGC meeting.

UGC sources say that there have been allegations of irregularities in setting up a laboratory at the Bangabandhu Sheikh Mujibur Rahman Digital University in Kaliakoir, Gazipur. Even before getting UGC approval for the university’s course and syllabus, a bill of around Tk 60 million (Tk 6 crore) has already been paid for setting up a lab at the university. UGC is now investigating whether the lab has actually been set up.

UGC has launched a second round of investigations into allegations against Muhammad Ahsan Ullah, vice chancellor of the Islamic Arabic University in Basila, Mohammadpur of Dhaka. The first investigations remain unfinished.

Investigations into irregularities regarding recruitments and discrepancies in taking honorarium, along with various other allegations against former vice chancellor of Tangail’s Maulana Bhashani University of Science and Technology, Md. Alauddin, were carried out over a long stretch of time, but UGC still has not submitted its report in this connection.

The inquiry report regarding Sylhet Medical University was submitted in January. The university authorities appointed 109 persons outside of the approved posts even before the institution began functioning. These provisional appointments were given to the vice chancellor’s relatives and also relations of several ruling party MPs. Though the report was submitted, there has been no action.

A long investigation is also being carried out against the former vice chancellor of Chittagong University regarding discrepancies in setting up the ‘Bangabandhu Chair’. UGC is also looking into allegations of misappropriation of admission fees by the Jahangirnagar University administration. This inquiry is being carried out at the directives of the Anti-Corruption Commission.

No action even after allegations proven

Allegations had been brought about against former vice chancellor of Rangpur’s Begum Rokeya University, Nazmul Ahsan Kalimullah, and others, for misappropriating funds of the university’s special development project. These allegations were proven to be true, but even so no action was taken. Quite to the contrary, he held a press briefing and defiantly said that these allegations were being made against him at the behest of education minister Dipu Moni.

Former vice chancellor of Rajshahi University, M Abdus Sobhan, intentionally lowered the criteria for recruiting teachers and appointed his daughter and son-in-law. His administration similarly sidestepped qualified persons to appointed 34 teachers of relatively lower merit. The UGC inquiry committee recommended that these recruitments were cancelled and action be taken against the vice chancellor, but no action was taken. In fact, on the very last day of his tenure in office, he recruited 141 persons on ad hoc basis before leaving. UGC investigated that too and called for steps to be taken against him, but to no avail.

A former vice chancellor of the Open University had been accused of relaxing rules to recruit his son. UGC has also carried out inquiries into several other universities as well as the Pabna University of Science and Technology. It was seen that certain incidents of corruption and misdeeds would require the removal of certain vice chancellors, but in actuality no measures were taken. Only the former vice chancellor of Begum Rokeya University, Abdul Jalil, had to go to jail in a case of the Anti-Corruption Commission.

There was a time when the government would search high and low for meritorious teachers to appoint as vice chancellor. After the independence of Bangladesh, Bangabandhu Sheikh Mujibur Rahman approached certain renowned academics and appointed them as vice chancellors of various universities.

On 29 March in the Jatiya Sangsad (national parliament), a parliamentarian said there was a time when one would bow one’s head in respect upon hearing the name of a vice chancellor. Now one bows one’s head in shame hearing of their corruption. They are recruiting members of their family and resorting to all sorts of corruption. Demands were made to appoint vice chancellors outside of party consideration.

On the same day in parliament, education minister Dipu Moni said, “We have many eminent teachers of whom we would be proud to see as vice chancellors. But many of them are reluctant to take on administrative duties. Even if we want the best, that doesn’t not mean they are always willing.”

Educationists, however, feel that there is still scope to appoint good teachers as vice chancellors if they are given the proper facilities and the chance to function independently. Academic qualification and administrative competence both must be taken into consideration.

UGC member Muhammad Alamgir was vice chancellor for two terms at Khulna University of Engineering and Technology. He says that to resolve this crisis, first radical changes must be brought about in the process of appointing vice chancellors. Firstly, the universities run under the 1973 ordinance, it must be ensured that the vice chancellors must always be appointed by means of the senate election in keeping with the law. This is not always followed at present.

As the other universities do not have this regulation, vice chancellors can be appointed there by means of a viva taken under a board. Since the tenure of a vice chancellor is fixed, qualified teachers can be selected before the tenure ends. Presently, the private BRAC University and the Islamic University of Technology in Gazipur appoint the vice chancellors in this manner. When a qualified person is appointed in such a manner, automatically most of the discrepancies and irregularities come under control. Even after that if any allegations arise against anyone, immediate action must be taken.

The registrar of a public university, on condition of anonymity, said if a powerful board could be formed under UGC to recruit the teachers, officials and employees, then many teachers wouldn’t be so eager to become vice chancellor.

UGC’s former chairman Professor Nazrul Islam feels that corruption has become deeply embedded in all sectors of society. The entire society is in a mess and it is difficult to emerge from this. But even so, this must be resolved. The vice chancellors must be selected properly. The concerned persons in the government together must overhaul education from top to bottom. The government, that is, the ministry, has the most responsibility in this regard. UGC also has a role to play.