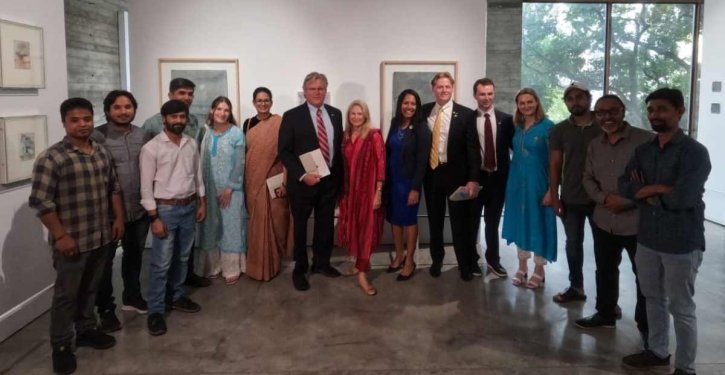 “My father was with the people of Bengal during the war. As a member of his family, I am very proud of Bangladesh’s independence and progress,” he said while visiting the Bengal Foundation in Dhaka’s Dhanmondi.

Visiting the ongoing travelling exhibition “Voices of Bangladesh: the Journey to 50” at Bengal Shilpalay, he said: “The images from the exhibition are very powerful for anyone, especially for us, our family because we have seen the whole footage of my late father standing with the people in the refugee camps. What he saw 50 years ago were atrocities and catastrophes.”

“So it’s very moving for us and our family, and that is one of the reasons I wanted my children to come with us on this trip – so they can learn not just the history, but the important role that my father was able to play during the most critical time of Bangladesh’s Liberation War.”

Before visiting the exhibition, the Kennedy Jr family enjoyed a traditional Bengali sarod performance by the students of Bengal Parampara Sangeetalay.

They also visited the exhibition “The Work of Creation 2” by eminent artist Kazi Ghiyasuddin at Bengal Gallery and visited Bengal Boi.

“I and my family are overwhelmed to see Bengal Foundation’s multi-dimensional approach to promote art, literature and culture,” Kennedy Jr said.

A joint initiative of the US Embassy of Bangladesh and the Bengal Foundation, the Voices of Bangladesh: the Journey to 50 is an exclusive oral history collection programme which is showcasing the unknown stories of current Bangladesh, created through various political and social evolutions from the independence to the next five decades.

The travelling exhibition is being held as part of the programme across Rajshahi, Khulna, Dhaka, Chattogram, and Sylhet districts.