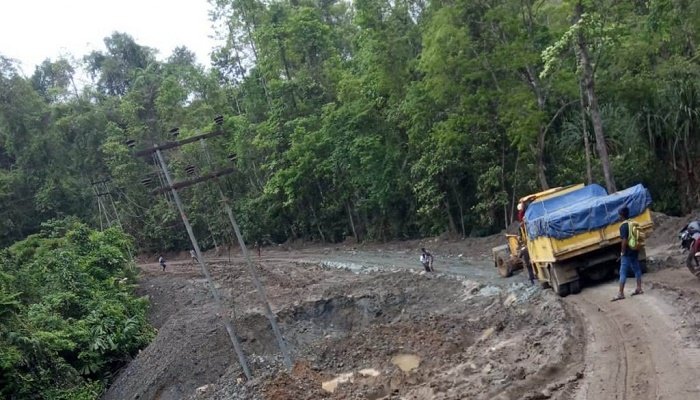 Posted By: GB Todayon: May 19, 2022In: Andaman and Nicobar Islands, More
Print Email

Rabindranath Biswas, Diglipur: Mr. Dipankar Mistry, Pramukh Diglipur with a delegation of PRI members and Ex-Pramukh Diglipur and Ex-Pradhan of Nabagram Panchayat met Mr. Radhey Shayam Meena (DANICS) Assistant Commissioner, Diglipur today. During the meeting, the Pramukh apprised the Assistant Commissioner of a plethora of issues. At the outset the problem of the NH was raised. From Kalara Junction to Sitanagar the condition of the road is beyond anybody’s expectation, they said. The ACDP said that he is seized of the bad state of the NH especially of this stretch of the road. He then assured the Pramukh and the other PRI members present there that, the Deputy Commissioner, N & M Andaman is scheduled to visit Diglipur shortly and the Assistant Commissioner will brief and take up the NH-matter with him on priority to redress the problem. Smti Jayanti Jyoti, Zilla Parishad Member, Kalighat Constituency, Shri Shyamol Mondal, Ex-Pramukh Diglipur, Shri Niranjan Baroi, Ex- Pradhan Nabagram raised the issue of erratic service of the BSNL in Nabagram area.

The Assistant Commissioner, asked the SDO, BSNL, Diglipur about the problem, the SDO who is on leave took note of the problem and instructed his staff to look into the matter and bring the BSNL’s service to normalcy in the area. Smti Jayanti Jyoti and these two Ex-PRI heads raised the issue of irregular bus service on the routes of their area. They said that the condition of the stretch from Sitanagar to Kalara Junction is so bad, that the vehicular movement is at stake and their region is on the verge of bifurcation in terms of transportation system. Under the given situation they suggested that, two nos. of STS buses are kept in their area which will ply upto Kalara Junction and there will be other buses from Sitanagar side and will build a link for the passengers between Kalara Junction and Sitanagar and transport the passengers to and fro and vice versa. The ZPM Paschimsagar constituency also raised the same transportation problem. The STS official who present in the Chamber of the ACDP, said that it seemed less feasible as there are a number of constraints attached to it, however he will consider to implement it on a trial basis, if all aspects permit.

Among other issues which emerged in the discussion were the land dispute, family disputes, on trivial issues etc. The Pramukh, Diglipur, mentioning “Prasasan Aapke Dwar” said that if the officials of the local administration visit villages and resolve these conflicts, villagers will be much benefitted. The Assistant Commissioner, to this effect, advised the PRI members to organize meetings in the villages especially in the evening times in which the ACDP, Tehsildar or the BDO may be invited to be present in order to dispose of the petty disputes that continue to pour in the Assistant Commissioner’s Office; and thus these disputes can be disposed at village levels and to which the PRI members agreed, source said.