বাংলা সংস্করণ
Headlines
Home More Interviews There is a growing interest of Turkish companies for business, investment and infrastructure in Bangladesh: Ambassador of Turkey 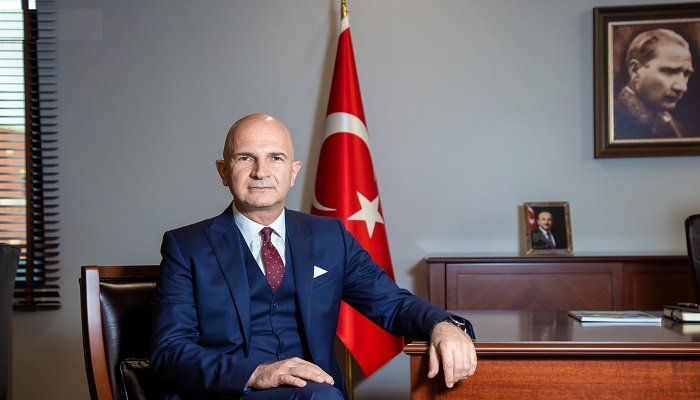 Mustafa Osman Turan has been the ambassador of Turkey in Bangladesh since February 2020. He has been involved in various initiatives to promote Turkey’s cooperation with Bangladesh in various areas including business and investment, defence and more. In an interview with Raheed Ejaz, he talks on various aspects of bilateral interest between the two countries.

Raheed Ejaz: How would you evaluate Dhaka-Ankara overall relations compared to the past, now just in the areas of trade, commerce and defence?

Mustafa Osman Turan: We are on a path which takes us to a new level of bilateral relations. I see this rise of level of our bilateral relations in many fields, not only in one or two fields. For example, in trade relations I see more balanced trade. When I came here two and a half years ago, the bilateral trade volume was around USD 850 million. Despite Covid-19, at end of last year it reached more than USD 1 billion. In the first four or five months of this year, we see a similar increase of 15 per cent. We do not only export to Bangladesh, we also import from Bangladesh. I see the growing interest of our companies to invest in Bangladesh. The majority share of Singer Bangladesh has been bought by Arcelik. They will invest in the Japanese Special Economic Zone. One of our best companies in energy sector Aygaz is investing in Chittagong together with United Group. What is really promising is that there are other companies especially in the contracting sector who are showing more and more interest in infrastructure projects in Bangladesh.

Raheed Ejaz: In which infrastructure sectors of Bangladesh are the Turkish companies showing interest?

Raheed Ejaz: So these companies are showing interest is all sorts of infrastructure projects of Bangladesh?

Mustafa Osman Turan: Our contracting companies are world famous. Out of 250 best contracting companies in the world, 40 of them are Turkish. They are working in Africa, Central Asia, Balkans and the Middle East. Now they are more interested in Asia. So, Bangladesh can be another hub for them for infrastructure development.

They build very fast. They build very good quality and their price is competitive. These three factors make them successful. Because of their international track record they can raise funding easily.

Raheed Ejaz: And what are the reasons behind the growing interest of Turkish companies in Bangladesh?

Mustafa Osman Turan: There is a growing interest of Turkish companies for business, investment and infrastructure in Bangladesh and this is not by accident. It is due to Bangladesh’s growing economy, size of the market, political economy and the fact is our bilateral relations are improving.

Raheed Ejaz: What would y9u say about the business and investment environment in Bangladesh?

Mustafa Osman Turan: It is not an ideal environment here, I have to admit. The government has good intentions for foreign investment. The government also has political will. I think the problem lies at the lower level of bureaucracy and in terms of custom issue, tax issues. There is need for streamlining. For example, a LPG company of Turkey who has now invested in Bangladesh has to take 38 different licenses to operate. In the past two years they have completed 36 licenses. Now they need two more. This sort of complicated bureaucratic procedure needs to be addressed.

Raheed Ejaz: Good relations are one of the main preconditions for the development of business, investment and other areas. Are there any special factors contributing to good relations between Turkey and Bangladesh?

Mustafa Osman Turan: We are very similar culturally and religiously. We are also growing economies and this offers a lot of opportunity for both sides. We are also peace loving nations. Turkey has become one of the top tourist destinations for Bangladeshi nationals. Now we have started to receive medical tourists from Bangladesh too. I think the top leadership of both the countries realise the significance of the relationship from the broader perspective. On top of that, Prime Minister Sheikh Hasina sent a solidarity message to our president Erdogan.

Raheed Ejaz: Are you referring to Prime Minister Sheikh Hasina’s letter of support to Erdogan in 2016 when he had been the prime minister?

Mustafa Osman Turan: I refer to Prime Minister Sheikh Hasina’s letter to President Recep Tayyip Erdogan during the failed military coup of 2016. Then we must mention the issue of Turkish first lady’s visit to Bangladesh immediately after the exodus of Rohingya into Bangladesh in 2017. And then Turkish Prime Minister Binaly Yildirim visited Bangladesh. So, these are milestones of our better relations and building trust.

During his visit to Bangladesh in 2020, Turkish Prime Minister Binaly Yildirim spoke of selling military hardware to Bangladesh.

Raheed Ejaz: Are there any plans to sign a comprehensive defence agreement with Bangladesh?

Mustafa Osman Turan: The cooperation between the two armed forces, including training, is very good. So there is no need for any new agreement. But time will tell whether a further agreement is needed.

Turkey’s drones have a solid reputation around the world. At a press briefing last year you spoke about joint manufacture of Turkish military equipment with Bangladesh. Has there been any developments in this matter?

A Turkish company signed a contract with Bangladesh Ordnance Factory for the artillery shell joint production. We are looking into other possibilities.

I would also like to inform you recently the Bangladesh Armed Forces signed a contract with Turkish company Bayker for the procurement of Bayraktar TB2 drone.

Raheed Ejaz: You you think defence cooperation has come to the fore in relations between the two countries in recent years?

Mustafa Osman Turan: Definitely. We are participating in the bidding process of Bangladesh Navy projects, like frigate and petrol vessels of the Coast Guard. Turkish companies are ready to build those ships and vessels in Bangladesh with the involvement of Bangladeshi engineers and technicians for the Coast Guard in Khulna Shipyard and Chittagong Dry Dock for the Navy. We are bidding for both projects. We are also with the Air Force for various projects.

In Turkey, we are now 80 per cent self-sufficient. We only import 20 per cent from mostly NATO countries. We produce at NATO standards, but our prices are very competitive and we don’t attach political conditions.

Raheed Ejaz: Turkey has asked for 60 acres of land to set up a specialised hospital in Bangladesh? Why such a vast area of land?

Mustafa Osman Turan: During his visit in Ankara, Bangladesh’s foreign minister AK Abdul Momen proposed this to President Erdogan. And our president responded, asking for the land to be allocated. This is a commercial project. We are very experienced in PPP projects we have more than 15 city hospitals with a capacity of two to three thousand bed capacity. That is the type of project we would like to build here. Foreign investors are not interested in small hospital projects. In PPP projects, size is really important. That is why our president feels that to convince the private sector to invest in Bangladesh’s health sector you need a big area of land.

Raheed Ejaz: Turkey has been assisting Bangladesh since the influx of the Rohingyas, but no progress has been made in their repatriation. Unless the repatriation process begins, there is fear of unrest emerging in the region. How does Turkey want to assist Bangladesh in this regard?

Mustafa Osman Turan: If the Rohingyas can’t return to their own homes, that may create instability. Repatriation is the answer to the problem. Myanmar has to create an environment conducive to their return. All the Rohingyas in the Cox’s Bazar camps want to return to their homeland, but firstly minimum conditions must be fulfilled for their safe and dignified return. The military coup in Myanmar has complicated matter. International pressure on Myanmar must be kept up for the repatriation of the Rohingyas. And international support for Bangladesh must also be kept up.

Turkey will be providing financial and political assistance to Bangladesh for the Rohingya genocide case in the International Court of Justice (ICJ). Our support for Bangladesh will continue until the repatriation of the Rohingyas takes place.

Raheed Ejaz: The UN and Turkey mediated the agreement between Russia and Ukraine for the Ukraine ports in the Black Sea to open up for export of food grain and fertiliser to the world market. How did Turkey carry this out successfully?

Mustafa Osman Turan: Since the outbreak of the war, we have been relentlessly working on two tracks: first of which is actively supporting the efforts to ease the humanitarian situation.

And the second track where we play a significant role is facilitating the efforts for a negotiated settlement. We engaged both sides of the conflict diplomatically with a view to bringing an end to the hostilities. Having a strategic partnership with Ukraine and a working relationship with Russia in various regions, makes Turkey’s position unique.

Following President Erdogan’s outreach to both sides at the highest level, technical talks on exporting Ukrainian grain were held in Istanbul on July 13 with the participation of the Turkish, Russian, and Ukrainian military delegations, and the UN.

After further intense negotiations, the parties reached an agreement that was signed on 22 July 2022 in Istanbul.

We need to pursue all possible avenues of diplomacy to prevent and end armed conflicts. Our trademark role in mediation for peace aims to do just that!