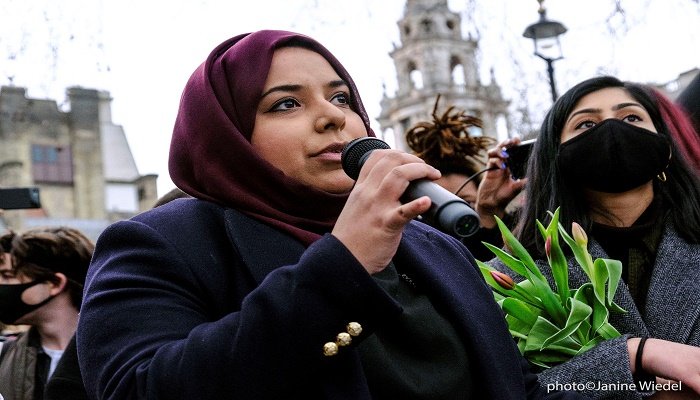 This socialist Muslim working class woman will not be silenced: Apsana Begum MP

East London, United Kingdom: Addressing Socialist Campaign Group of Labour MPs (SCG) fringe rally (27 September 2022) at Labour Party Conference, Apsana Begum MP described how she had been treated as “chilling” and vowed to not be silenced.

Full Text of her speech: “It is no secret that I have had first-hand experiences of the factionalism and racism exposed in the Forde Report.

“You would have thought that as the first hijab wearing MP – I would have been given MORE support from the Labour Party but in fact it has been the absolute opposite. I have never been given a chance. The level of inhumanity towards me is just chilling.

“The recent trigger ballot process in Poplar and Limehouse has been riddled by intimidation, allegations of harassment of members – particularly of women – the misuse of data, an array of membership irregularities, and allegations of fraud, and even bribery.

“Yet what I have now learnt is that the party have had the audacity to brief that they had not received many complaints. It’s only because of dedicated local members courageous and determined to bring the injustices to light, that the Party had to eventually admit otherwise. Senior officials briefed that there was a lack of evidence despite the testimonies of a number of people, mainly women and despite an array of evidence submitted to the party.

“There are even audio recordings of a conversation with an individual who was listed as being at a meeting but admitted he was not in attendance and some-one else had logged on under his name. Then there’s video evidence of an online meeting being coordinated by a group of people in a basement room, including influential local Labour figures from other branches who should have not been there.

“A few weeks into my trigger campaign I was signed off sick which the party and Keir Starmer and the leader’s office were made aware of. I could not continue the campaign due to my ill health and despite the party being in receipt of the sick note the party briefed and denied its existence until pushed further. I can’t think of any circumstance where it would be acceptable to ignore a sick note in this way – that too from a party of Labour.

“And all of this – after the incredible trauma of the malicious trial by then Labour-led Tower Hamlets council and the attempt to send me to jail.

“Comrades there is no doubt in my mind – I am targeted because I am a socialist left wing Muslim working class woman.

“I know that my experiences are not happening in isolation but that members all over are suffering. We must understand the determination to get rid of me – to get rid of you, to get rid of the left, is testament to our power. They would not be resorting to these tactics if they didn’t fear what we were capable of.

“I don’t know what the future will hold. BUT for now, I want to make this clear: this socialist Muslim working class woman will not be silenced.

“With the cost-of-living crisis devastating our communities, with climate disaster upon us, with workers and our trade unions under constant attack, with our civil liberties being eroded, with migrants being persecuted and with our services decimated, we owe it to each other, we owe it to future generations – and yes we owe it to ourselves – to stand together and resist.”