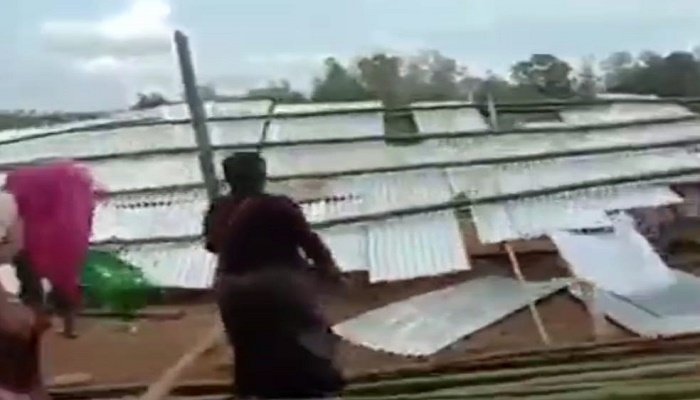 After the politically motivated vandalization, large numbers of security forces were deployed in that area to defuse the tension, in which two construction labourers’ sustained critical injuries.

Sources said that recently state government has sanctioned fund for construction of one bio-fertilizer factory, one driving school and a helipad at government ‘Khas’ lands in Mukraibari village under Amarpur subdivision. When, the subdivisional administration started construction works in that site, one Tipra-Motha supporter Bikram Joy Reang raised his objection over the construction by claiming that land belongs to him. Later, subdivisional administration has organized a meeting with the community heads of Reang tribe and showed the land documents belongs to government’s ‘Khas’ property. The authorities have also assured government job to a family member of Bikram Joy Reang. After the unanimous decision, the authorities resumed the construction works by deploying security forces at the site.

But, on Thursday regional Tipra-Motha organized a meeting at Mukraibari SB School ground in presence of deputy CEM Animesh Debbarma and MDC Doli Reang. When a rally of Motha supporters passed through the construction site, unruly workers of Motha started indiscriminate attacks over the labourers of construction site and they totally vandalized the labourers sheds and foundation works of bio-fertilizer factory in presence of police and security forces. After indiscriminate attacks, two labourers, Madhab Das and Sevan Lal Das suffered grievous injuries and were shifted to local hospital.

Local sources claimed that leaders of Motha have instigated their supporters for vendalization.

While, OC of Birganj police station Jayanta Das said that Tipra-Motha has obtained the permission for a meeting at Mukraibari school ground, but police does not give them any permission for a rally in the locality. He said that contractor of the construction site Tapan Chakraborty has filed a complaint before the police and they will take all legal action against turbulent elements.