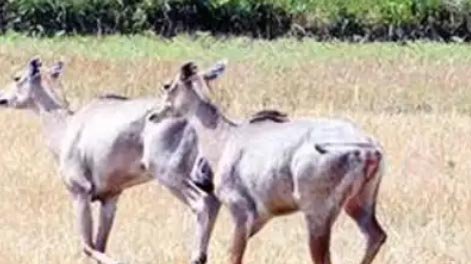 Bihar News Desk: Around 30,000 small and marginal farmers of 27 blocks in East Champaran district are jubilant after getting the information from the state environment, forest and climate change department that more than 2,500 nilgais (antilope) which were damaging their standing crops would be either killed or chased with the support of forest and block-level workers. They have been facing this menace for the last 15 years.

It has been a longstanding demand of the various organizations of farmers to resolve this issue.

Abhishek Kumar, divisional forest officer (DFO), East Champaran said, “A special drive will be launched, which will be a joint venture of the forest department, block officials and gram panchayat representatives of Areraj and Madhuban blocks of the district from May 18 in the first phase with the support of mukhiyas. Four shooters have been called from Telangana. These animals would be hunted down and not more than 50 at a time will be killed. Besides, it is mandatory to cremate the carcass of the slain animals with the help of panchayat functionaries and villagers.”

Madhuban farmers Kameshwar Kushwaha and Ramesh Prasad welcomed the decision of the state government. While Tunnu Pandey and Upendra Pandey, farmers of Rupani village said that Nilgais ahve damaged their wheat, paddy, maize, vegetables, sugarcane, oil seeds, potato crops. According to official sources, “The central government has shifted the nilgais from Schedule III of the wild life protection Act to Schedule V in 2015. The nilgais fell under the category of animal that were detrimental to agriculture crops and the central government granted permission to kill them.”

Around 200 mukhiyas of different panchayats of 27 blocks have demanded to launch this drive against nilgais in their panchayats and they will give full supports to officials because these animals are destroying all the crops.