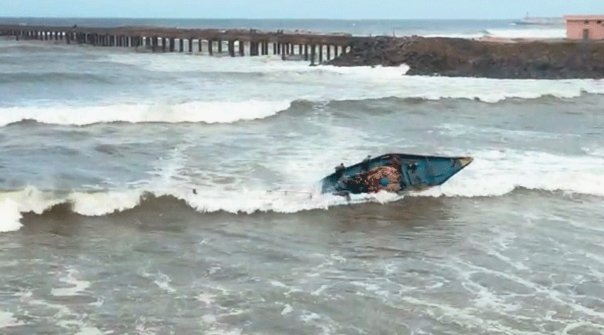 Subhashish Mohanty, Bhubaneswar: The Odisha government on Tuesday warned fishermen that it would take action against them if they venture into the sea violating the order restraining them from going into the sea during the time of cyclone.

The state government took the action following reports from different areas particularly from Ganjam district about how fishermen entered into the sea for a good harvesting of fish during the time of cyclone putting their life at risk.

On Tuesday, 60 fishermen had a miraculous escape when the six boats in which they had ventured into the sea in Ganjam capsized in the sea near the coast. Even one of the boats was videographed when it overturned near the coast at Aryapalli in Ganjam and the fishermen onboard jumped into the sea and swam to the nearby beach. On Monday, Indian Coast Guard had airlifted 11 stranded fishermen from the Bay of Bengal in the Ganjam coast following a request from the Odisha government.

Considering all these, Special Relief Commissioner P.K. Jena tweeted: “Some information being received that inspite of warning some fishermen are venturing into the sea. District administration advised to do public miking in the areas and advised fisher folk not to venture into the sea till May 12th. If someone doesn’t listen and disobey, action under DM (Disaster Management) Act be taken against them.”

The Ganjam administration also announced closure of all sea beaches including the famous Gopalpur beach till May 12.

On the cyclone movement, the IMD predicts, “It is very likely to move nearly northwest wards and reach west central Bay of Bengal close to Kakinada-Visakhapatnam coasts by May 11 morning. Thereafter, it is very likely to re-curve slowly North-North eastwards and move along Andhra Pradesh coast between Kakinada and Visakhapatnam and then emerge into northwest Bay of Bengal off north Andhra Pradesh and Odisha coasts. It is likely to weaken gradually into a cyclonic storm by May 11 morning and into a deep depression by May 12 morning.

However, the SRC office has made it clear that the cyclone would further weaken and the system is likely to change its course and travel along off the Odisha coast. “Cyclone Asani has already gone past the stage of maximum intensification, it is likely to weaken gradually from now.

“After coming near Andhra coast this evening, the system will change its course and travel along /off Odisha coast,” DG, IMD, Mrutyunjay Mohapatra said, adding that under its impact many places in southern Odisha are likely to witness heavy rainfall.

As per the prediction, the Cyclone Asani is expected to inch closer to north Andhra Pradesh coast and then re-curve to move parallel to north Andhra Pradesh and Odisha coast after which it is likely to gradually lose steam. “Wind speed would be around 50km-60km near the Odisha coast. However, the cyclone would not hit the landmass,” said Mohapatra.

In another development, chief secretary Suresh Chandra Mohapatra along with SRC Jena on Tuesday participated in the National Executive Committee meeting held under the chairmanship of secretary ministry of home affairs, Ajaya Kumar Bhalla over video conferencing.

Secretary Bhalla reviewed the preparedness of Andhra Pradesh and Odisha to face impending Cyclone Asani in context of its latest position and track.

The chief secretary appraised the Union government that the “state administration is in all readiness to face the ensuing cyclone. Keeping in view the prediction of the IMD, the districts namely Koraput, Malkangiri, Ganjam, Rayagada and Gajpati have been kept in high alert. The coastal districts have also been kept on alert. Odisha Disaster Rapid Action Force (ODRAF) and fire service teams have been mobilised to the southern districts. They will be pre-positioned well before the time of the cyclone passing near Odisha coast.”