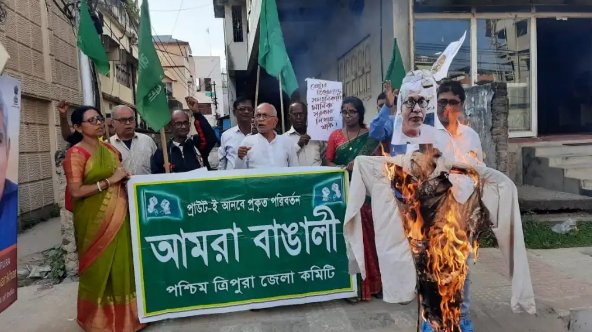 Tripura News Desk: After the Leader of the Opposition and former Tripura Chief Minister Manik Sarkar extended his support towards Tipraland, the Amra Bangali staged a protest and burnt effigies of the former CM in West Tripura.

Manik Sarkar recently speaking at a public function spoke in support of the demand of Greater Tipraland which has been opposed directly by the Amra Bangali.

The organisation termed the demand for Greater Tipraland unreasonable and said that this demand can cause division among the people of the state.

It may be mentioned that Tipraland is the name of a proposed state in India for the indigenous Tripuri people in the tribal areas of the Tripura state.

The proposed state covers 68% of the total geographical area of Tripura and is home to over one-third of the total population of Tripura. NE NOW NEWS