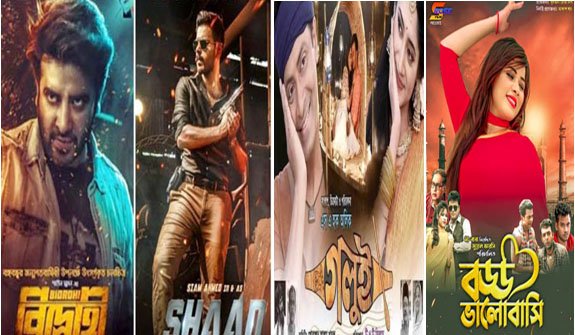 Posted By: GB Todayon: May 03, 2022In: Entertainment, More
Print Email

Sanjay Adhikari: Cinemas are having silver lining this year as theatres reopened and several motion pictures shot to entertain people across the country.

The box offices ran dry in the last few years due to Covid-19 pandemic. The cinema halls were also closed, sending the industry to cold storage.

Some four movies have been released by Dhaliwood producers on the occasion of Eid-ul-Fitr. A total of over Tk 10 crore has been invested in these four films.

Producers are quite optimistic that box offices will do good business as the movie-goers are ready for such amusement.

The films are: ‘Galui’, ‘Shaan’, ‘Bidrohi’ and ‘Boddo Bhalobasi’. The pictures are being screened in 167 cinema halls across the country.

After a long time, two films of the most ‘influential’ star of the country’s film world, Shakib Khan, are being released simultaneously on the Eid festival.

Of these, the government-funded ‘Galui’ was recently made. On the other hand, the film ‘Bidrohi’ is being released three years into its production.

According to the production company, ‘Shan’ is the highest budget movie this Eid. A total of Tk 4.5 crore ($5 million) has been spent on its production. The budget of ‘Bidrohi’ is Tk 3 crore.

Meanwhile, the government-funded movie ‘Galui’ spent Tk 2.20 crore while ‘Boddo Bhalobasi’ has been made at a cost of 86 lakh taka. All in all, a total of over Tk 10 crore movies have been released this Eid-ul-Fitr.

Khorshed Alam Khosru, the producer of ‘Galui’, told the Business Insider Bangladesh, “We are in a crisis. It is a difficult task to bring up the investment of films with this number of halls.”

He said: “But if the cinemas go well, a good commission can come from the Cineplex. Apart from this, in the second week, our film could be taken up to the new halls. We hope that our theatres will grow in this way and the money invested will come back.”

Azad Khan, the producer of the big budget film ‘Shaan’, said, “If 100 more halls were available, there had been a possibility of making a profit. Still, if the cineplexes run well for a month or two, something good will happen.”