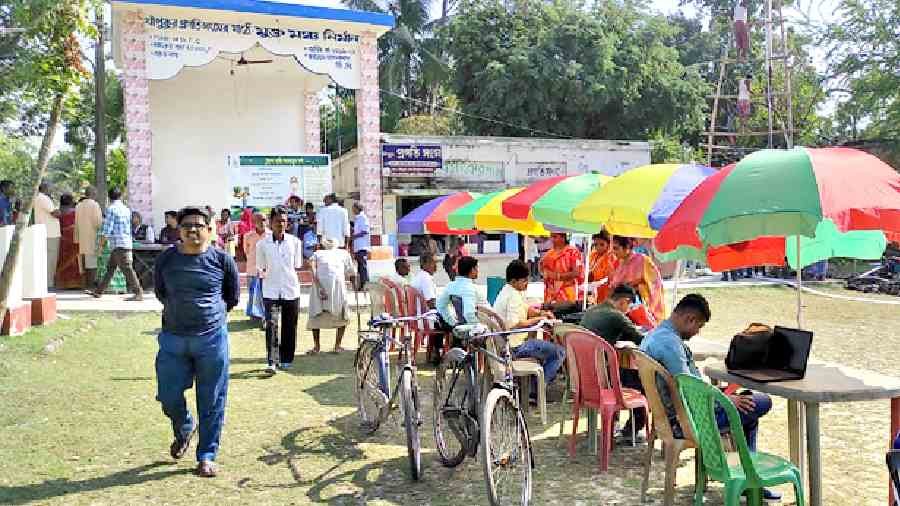 According to senior officials, Mamata was disappointed after visiting Samsernagar of Hingalganj, one of the remotest parts of West Bengal

Snehamoy Chakraborty, Taki (North 24-Parganas): In the month-long drive of the fifth edition of Duare Sarkar, which began on November 1 across Bengal, 367 camps had been held in five remote blocks of North 24-Parganas, including the Sunderbans, roughly around a dozen a day.

In contrast, the same area will get 255 camps for five days from Thursday — a whopping 51 per day — during the extended version of Duare Sarkar.

Sources said the drastic rise in the number of camps was the result of chief minister Mamata Banerjee’s observations during her three-day trip to the Sunderbans, with substantial legwork in some of the remotest corners of the land of tigers and crocodiles.

According to senior officials, Mamata was disappointed after visiting Samsernagar of Hingalganj, one of the remotest parts of Bengal, as she realised that benefits of her government schemes remain a distant dream for people of many such areas.

“She extended her trip to assess the situation in a different area of the Sunderbans, after she felt palpable dissatisfaction with the administration in the Samsernagar event,” said a senior official.

Chief secretary H.K. Dwivedi issued an order to extend Duare Sarkar camps for another five days on Tuesday night, hours after Mamata’s public programme at Samsernagar, where villagers had told her there were no such camps in their areas.

“I think there is a need for more Duare Sarkar camps in these areas,” she had said then.

After the Duare Sarkar drive was extended till December 5, the administration has planned to shower the area with camps to distribute government benefits.

All the panchayats of blocks, such as Hingalganj and Hasnabad, are set to get eight to 12 camps every day, starting Thursday.

Sources said for each panchayat of the Sunderbans, the government organised a mobile camp, which is capable to roam across the areas.

Hingalganj, the remotest block in the Sunderbans, had seen only 70 camps over a month. But now, 72 such camps would be organised in the areas till December 5.

Although Mamata, who returned to Calcutta on Thursday afternoon, witnessed the actual picture of deprivation in the Sundarbans in the past three days, a source said the scenario was not very different in other remote pockets of rural Bengal.

In many remote places, the state government organised comparatively fewer Duare Sarkar camps because of the inaccessibility factor, sources admitted.

But after visiting remote areas in Sunderbans, including Khanpukur village (not Khanpur as published) on Wednesday, Mamata did receive countless complaints from villagers regarding deprivation from benefits, which she felt were imperative to address immediately.

“We held Duare Sarkar camps in both Samsernagar and Khanpukur, which were visited by the chief minister in the past two days. We are holding two camps daily in each gram panchayat of the Sunderbans,” said Sharad Kumar Dwivedi, the North 24-Parganas district magistrate.

“She understood it is important for her government to reach out to people in theseremote places, properly, beforethe panchayat polls,” said asource. She also reportedly asked her party’s MLAs to engage with people in these areas extensively before elections, the source added.

“It’s beyond our imagination that the government will hold Duare Sarkar camps a day after her visit. The officials asked all villagers to turnup. We think our problemsof drinking water would beresolved soon,” said BisakhaMondal, a resident of Khanpukur, which Mamata visitedon Wednesday.