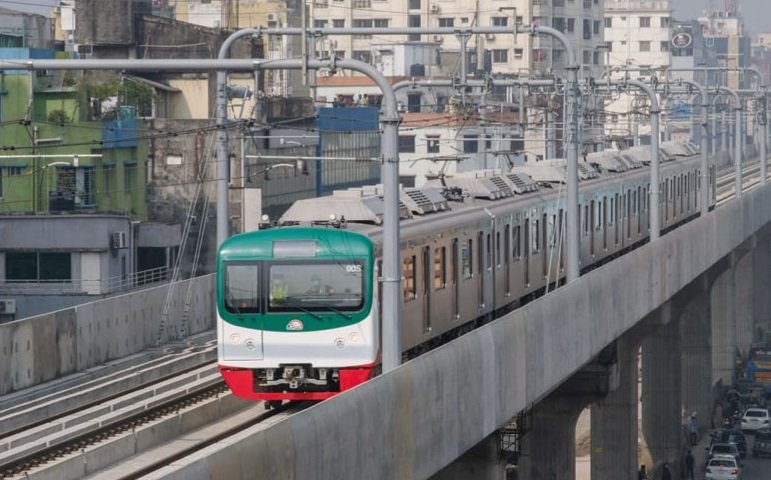 Launch of Metrorail in city: A new beginning for sustainable growth

Jannatul Islam, Dhaka: The metrorail will speed up the country’s economic growth by improving transportation infrastructure and easing the heavy traffic in the city, economists said, referring to the project as ‘a new start’ for sustainable growth of the country’s economy.

They said the metro rail would not only save time, but would also have a positive impact on green activities by discouraging the use of cars.

Traffic congestion in the capital causes Bangladesh to lose potential working hours worth Tk 1.4 billion per day, according to Bangladesh University of Engineering and Technology (BUET).

Prime Minister Sheikh Hasina inaugurated the Uttara-Agargaon section of the metro rail line on Wednesday which will open to the public on Thursday.

“It whelp the economy by reducing travel time. To reap the full benefits of the project, we need to set up more stations. In order to cover more beneficiaries with affordability, a ‘rate of return’ and a ‘cost benefit’ needs to be ensured,” Dr Mustafizur told the Daily Sun.

According to him, Metrorail does not deter car owners from driving on the roads at first.

“The green effect of metro rail depends on its management. When it attracts people beyond their income class, there will be fewer cars on the road, resulting in fewer emissions,” Dr Mustafizur Rahman noted.

Policy Research Institute executive director Ahsan H Mansur said the metro rail will support the economic growth of the country when all lines work in parallel.

The project certainly has a positive impact. In order to discourage people from using cars, we must manage the new transportation platform properly. The metro rail will start its sustainability once people from all walks of life feel comfortable with it,” Dr Mansur, who is also chairman of Brac Bank, told Daily Sun.

Moreover, the economist echoed Dr Mustafizur Rahmanf’s call for introducing shuttle service to assist passengers in moving from their neighborhood to the nearest metro station.

The 11.73km Uttara-Agargaon section of Metrorail opened on Wednesday with nine stations. After the full opening, expected in December 2023, people will be able to travel from Uttara to Motijheel in 40 minutes.