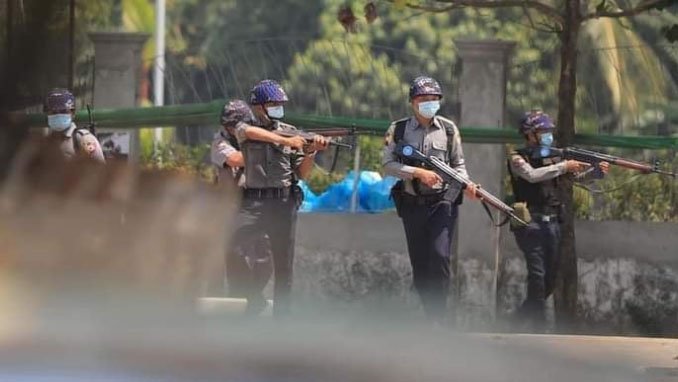 At around 11pm on Sunday, junta troops raided the home of Ko Nyan Win Htet, a second year psychology student at East Yangon University, in Yangon’s Dawbon Township for the second time in search of him.

During the raid, regime soldiers fired a warning shot and then detained all seven of Ko Nyan Win Htet’s relatives who were at home, including his parents and a 12-year-old and a 14-year-old, as hostages, according to a member of the East Yangon University Students’ Union. Ko Nyan Win Htet is in hiding.

“As far as we know, his family members are being held at Dawbon Police Station,” the Students’ Union member told The Irrawaddy.

“It is an unacceptable and inhumane act of the junta. These acts push us to continue to rebel against the regime as much as we can,” he said.

East Yangon University Students’ Union said that it will notify western embassies and international organizations of the arrests and closely monitor the situation, according to a statement released on Monday.

The junta has been seizing the relatives and friends of those opposed to its rule as a way of both coercing activists to turn themselves in and terrorizing the Myanmar people.

Over 250 minors have been detained by the junta since last year’s coup, while more than 1,800 people have been killed by regime forces attempting to crush opposition to military dictatorship, according to the Assistance Association for Political Prisoners.