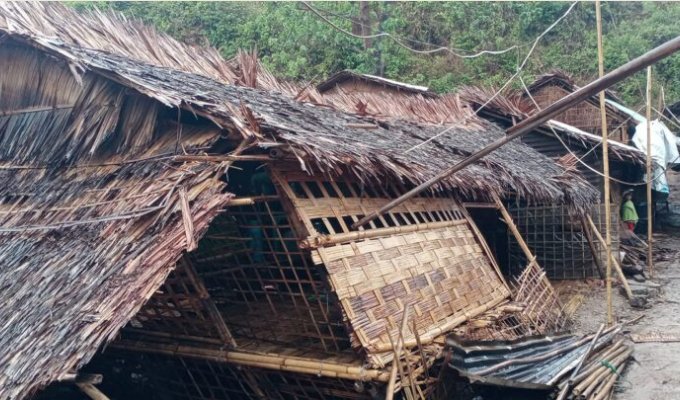 THE IRRAWADDY: Internally displaced people (IDPs) taking shelter at displacement camps in Kyauktaw, Mrauk-U, Rathedaung and other townships in Rakhine State are suffering many hardships under Myanmar’s military rule.

The regime’s Ministry of Social Welfare, Relief and Resettlement stopped providing rice to the camps in February.

Camp managers said they were told by ministry officials that it cannot provide supplies due to budget constraints.

Daw Win May Oo of Tinma village taking shelter at Kawi Yadanar camp in Kyauktaw said: “We sold our belongings and borrowed money when they provided food because the supplies were not enough for my family. We haven’t received rice from the social welfare ministry for four months now. So we have to do whatever jobs available to survive.”

There are nine IDP camps in Kyauktaw sheltering over 10,000 people. Most of the IDPs there are from villages along the Kaladan River between Kyauktaw and Paletwa Township in Chin State.

IDPs at the Myo Ugaung camp in Mrauk-U, which shelters over 500 households, are also going hungry, said Daw Tin Tin Yi from the camp.

“We are facing many troubles. We haven’t received food for months now. To return to our villages, there are still soldiers deployed in the village monastery and on a hill near the village. With their presence, we don’t feel safe to return,” she said.

Myo Ugaung camp shelters more than 1,000 people from Kyauktaw, Mrauk-U and Paletwa. And more than 10,000 people remain at camps in Rathedaung.

Ma Moe Than of Kyauktan village sheltering at Zedi Taung camp in Rathedaung said: “We haven’t received food and we can’t starve so anyone in the family who can work has to work. We do odd jobs in Rathedaung.”

The regime has sponsored the return of some people to their villages. But many dare not go back as they had lost their houses in fighting between Myanmar’s military and the Arakan Army (AA) and because of the risk of landmines and troop deployments near their villages.

Residents from Tima village in Kyauktaw, which had more than 700 households, have asked the regime seven times to return. But the regime has refused and villagers are facing many hardships.

Ko Ann Thar Gyi, who helps the displaced, said: “The authorities will not let the villagers return. They should be allowed to return as clashes have ceased. I urge the authorities to enable them to return to their homes safely.”

Many bamboo and thatch huts in Rakhine camps were damaged by storms on April 20.

More than 550 longhouses, housing 28,000 people in Rakhine State, need repair work ahead of the monsoon season. There is an immediate US$4.7-million funding gap for these repairs, reported the United Nations Office for the Coordination of Humanitarian Affairs on April 21.

Nearly 200,000 people were displaced by fighting between Myanmar’s military and the AA from late 2018 to November 2020. Many have returned to their homes since the clashes ceased but over 50,000 people remain in camps, according to organizations helping the IDPs.