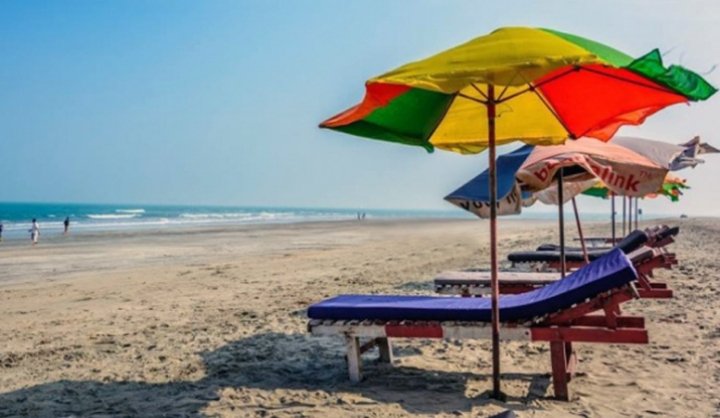 Abdul Kuddus, Cox’s Bazar: The holy month of Ramadan draws to a close and Eid-ul-Fitr is around the corner.

Over the last two Eids, due to the prevalence of the corona pandemic, very few tourists thronged the sea beaches.

This time things are different. At least one million (10 lakh) tourists are flocking to the world’s longest sea beach in Cox’s Bazar. Already 60 per cent of the hotel, motel, guesthouse and resort rooms as well as cottages have been booked in advance.

The remaining rooms will be snatched up before Eid, the hotel authorities are confident. They said they did not have any special offers or discounts this Eid.

However, several mobile courts of the district administration and separate monitoring teams of the hotel owners were on alert to ensure that the pressure of tourists was not used as an excuse to hike the room rents.

Hotel owners feel that the beach will remain filled with tourists for at least a week from Eid. Over this period, the hotels, restaurants and other tourism-related sectors in Cox’s Bazar will generate at least Tk 5 billion (Tk 500 crore) in revenue.

Abul Kashem Sikder, general secretary of the Federation of Tourism Owners Association of Bangladesh, comprising seven hotels and restaurants of Cox’s Bazar town, told Prothom Alo that in the last 16 days of December last year, around 1.5 million tourists had thronged Cox’s Bazar, but there had hardly been any visitors since then. Now they are expecting over 1.5 million tourists over the seven-day Eid holiday, though this may fall to 1 million as travel to St Martin had been halted.

In the meantime, hotels, restaurants and other tourist centres had spruced up for the holidays. The over 500 hotels, motels and guest houses at Cox’s Bazar can accommodate around 160,000 tourists daily. With mounting pressure, though, the tourists tend to crowd the rooms.

No special offers, but 60 per cent rooms booked already

It was 10:00 Friday morning at the five-star Hotel Seagull on Cox’s Bazar’s Sugandha beach. A few housekeeping staff were cleaning the place and most of the rooms were vacant. The hotel’s chief executive officer Sheikh Imrul Islam Siddiqui said that there would be 100 per cent of occupancy from the day after Eid. Already 70 per cent of the rooms had been booked in advance. They had no special offers or discount this Eid. Around 400 guests could be accommodated in 179 rooms of the hotel.

The environment-friendly Mermaid Beach Resort at Pechardwip along the Marine Drive in Teknaf was a great favourite among the foreign tourists. It can accommodate 120 guests in 51 cottages. The resort’s manager Yasir Arafat Risat said that from the day after Eid the hotel would be fully occupied. So far 80 per cent of the rooms had been booked. They had no discounts on the room rates, but any booking from 7 days after Eid till 30 May, they would offer a 40 per cent discount on room rates.

It was learnt that 60 per cent of the rooms had been booked in the high end hotels of Cox’s Bazar including Ocean Paradise, Simon Beach Resort, Hotel Long Beach, Hotel Cox’s Today, Hotel Kollol, Hotel Media International and over 50 other hotels in the area.

People have been cautioned against wandering around alone in the dark tree-covered areas of the beach at night or they may fall prey to muggers
General secretary of the Kalatoli Marine Drive Hotel-Resort Owners Association, Mukim Khan, said instructions had been issued to hang up the rooms rates in all hotels to prevent the tourists from being harassed. If the guests are overcharged, they can lodge a complaint at the tourist police service centre.

When tourists alight from their cars, certain ‘dalals’ (agents) rush up with attractive offers, conning the tourists into paying them extra. Some ‘easybike’ and ‘tomtom’ drivers also cheat the tourists. Tourists need to beware of these swindlers. It is best if the tourists go the hotels themselves and book their rooms.

At 10:00 Saturday morning, the sea at Kalatoli point is somewhat choppy in the inclement weather. But it is extremely hot too. Around 100 or so tourists are swimming in the sea, others are standing on the beach gazing out at the vast horizon, some are even on horseback. There are at least another 500 hundred or so tourists to the north of Kalatoli at Sugandha, Seagull and Laboni Point. There are five watchtowers along the 4km beach with around a dozen lifeguards keeping a lookout for the tourists’ safety.

Managing supervisor of Sea-Safe Lifeguard, Saifullah Sifat, said, there are around 1000 tourists at the beach now. From the day after Eid, it will be jam packed. At least 300,000 tourists will sward the area in one day.

Tourism-related persons said there were no tourists during Ramadan and the over 500 shops, the horses, the beach bikes, the beach chairs and umbrella, jet skis, photographers, tea and coffee stalls, fried fish stands, were all vacant and bare. Business will spring up from the day after Eid. The Inani pebble beach, the Teknaf beach, the Ramu Buddhist settlement, the Dulahazra Bangabandhu Safari Park in Chokoria, the Adinath temple in Maheshkhali and other amusement centres would throb with tourists.

The tourist police’s additional superintendent of police Mohammad Muhiuddin said the law enforcement was prepared to ensure the security of the tourists. People have been cautioned against wandering around alone in the dark tree-covered areas of the beach at night or they may fall prey to muggers.