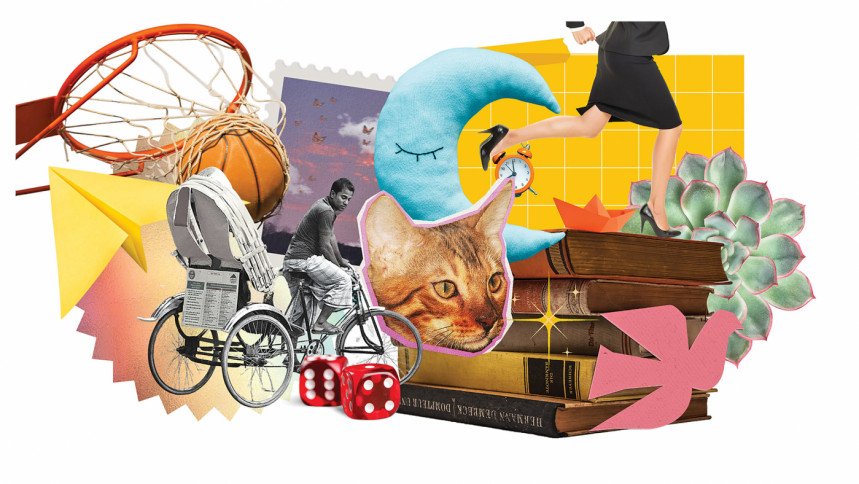 A new year arrives for us tomorrow–new plans, new people, new joys and failures. We asked our readers and writers to look back upon one memory from 2022 that sums up their story of this year. This is what they had to say.

I don’t remember when they took it down. We asked the building supervisor, the cleaners, anyone who would listen, but nobody had a clue. I remember it falling apart bit by bit–first the net, then the ring hanging loosely from the board. I meant to get it repaired, I really did, but I could never make enough time. Time is such an unforgiving teacher. Someone has painted over the holes and you can’t even tell that there was a basketball hoop on the wall.

The other day, I saw our neighbour’s kid dribbling a basketball in the garage. I looked up at the spot where our hoop used to be. The day we had it drilled to the wall, you complained that it was too high for your small legs, but soon enough you outgrew me in height, and wits.

I realized I had become a coastal town left unchecked for too long, and that grief strikes like a tsunami. Ignore the signs for too long, and just like seismic waves beneath the ground, the rumblings of your hurt will send warning centers blaring. The floodgates break, and all that pain comes pouring out at once.

My experiments with dream

As shocking as it was for me, I became a bibliophile in 2022, so it was for my family and friends. I had admired bookworms but never thought of becoming one. The smell of books unleashed a new side of me, a much more sorted one than before. This year, I sat for the medical admission test for the second time, in which I failed miserably, but it somehow changed my perception on life.

I was always good at English compared to the subjects I have had in school and college, but as per orthodox societal standards, I went with the aspiration of becoming a doctor. For quite some time, my thoughts were corrupted by a little distorted dream of being a doctor, which I would have been most terrible at if I had been one. After MAT, and after a long break from the vicious cycle of societal pressure, I was able to unhinge my mind and started to think about what I actually needed, not what society wanted me to do. Now I’m majoring in English Language and Literature at a private university in Khulna and I have never been happier. I have finally learned to love this side of life which is often neglected.

The last thing I wanted in my life was a cat. But there she was, sitting in the middle of the road, the day after Eid. I was not taken with her dishevelled appearance – loose strands of unclean fur jutting out here and there. It wasn’t love at first sight. But there was a job to be done here. Stupidly taking my friend’s advice, we took the kitten home, bathed her and fed her. On the second day, we christened her Nipsey Bella. On the third day, she had trained herself how to use the little. By day four, we had found her a home: one which was fated. Her constant cooing, following me around and timid expressions of affections had won me over. My mother, who was not a fan of animals, also took to her soon, with Nipsey often going to her and meowing incessantly to open doors or fill her food bowl. And as she spent each night always next to me, always followed me around and kept showering me in love, I too, broke.

Nipsey Bella had become a friend. Turns out, everyone is a cat person. They just don’t know it.

2022 felt longer than all the other years. Things that happened at the beginning of 2022 feel like a lifetime away. This was very surprising to me, since time usually seems to pass by too quickly.

Then I realised this year was just a yearlong chase. I spent it running, and I was running because I was told to run. I felt like I had to run, everyone around me was running. I didn’t know if I really wanted the things I was running after. Exercise is not my thing. Unless you enjoy it, 5 minutes of running feels never-ending. It knocks the breath out of you.

A year of tiny museums

I’ve always believed that one of the best parts of new friendships is getting to know them through their trinkets and knick-knacks. Be it old concert tickets, half-decayed bookmarks, a keychain, a second-hand book filled with annotations and dog-eared pages, I love seeing it all.

However, being a person with social anxiety, I have often held myself back from making new friends and ultimately, missing out the opportunity to visit their museum of knick-knacks. But this year has been different. When I think of my 2022 in review, I think of the many tiny museums I’ve visited on work tables and cubicles.

I think of the watercolour paintings, anime figurines, piles of books, fairy-lights, posters, and even the forgotten stash of batteries in dusty drawers. I think of printed photographs, trophies, and dehydrated plants. When I think of 2022, I think of fondly visiting my new friends’ tiny museums.

The likes of us

It was a cold January evening as I was seated on a rickshaw at Panthapath signal, when I saw a familiar face walking towards me. I reached for my wallet to give Rasheda apa her usual 20 when she held my hand and said “Hero, I don’t need your money today, I just came over to say that you look handsome”.

I hadn’t realized it then, but it was the first time I’d smiled so unequivocally, so sheepishly in months. Rasheda told me that it was probably her last month asking (read demanding) money from people on signals, because she had gotten a job. “The likes of us wouldn’t be on the streets if they treated us like humans,” I remember her saying as she walked away, twisting her orna around her index finger. It was the last I saw of her and her impish smile.

“You see how everything is cheaper here?” she said for the billionth time. It’d been years since my mom and I set foot in Gulshan’s DNCC Market. Kitchenware, cleaners, all the imported food, she was zooming past the items, sometimes asking “how much?”, getting disappointed by the reply, then scurrying to another shop. It was a special occasion for her, I could tell, but it shouldn’t have been.

When my sister was still around, the three of us would always hang out, at restaurants, amusement parks, fairs, anywhere we could find. After she moved away, the distance started to take shape. As I grew up, we got separated while staying put in the same house. And now we’re here, bonding through shopping. My mom’s final opponent was a man selling nuts. The lady kept haggling for eternity to bring the already low price down but left the shop without the bag of nuts. But she didn’t look defeated; the shopping bags in hand proved her triumph. “If you go there again, take me with you,” she said right after coming home. I haven’t been there ever since. I want to go every day.