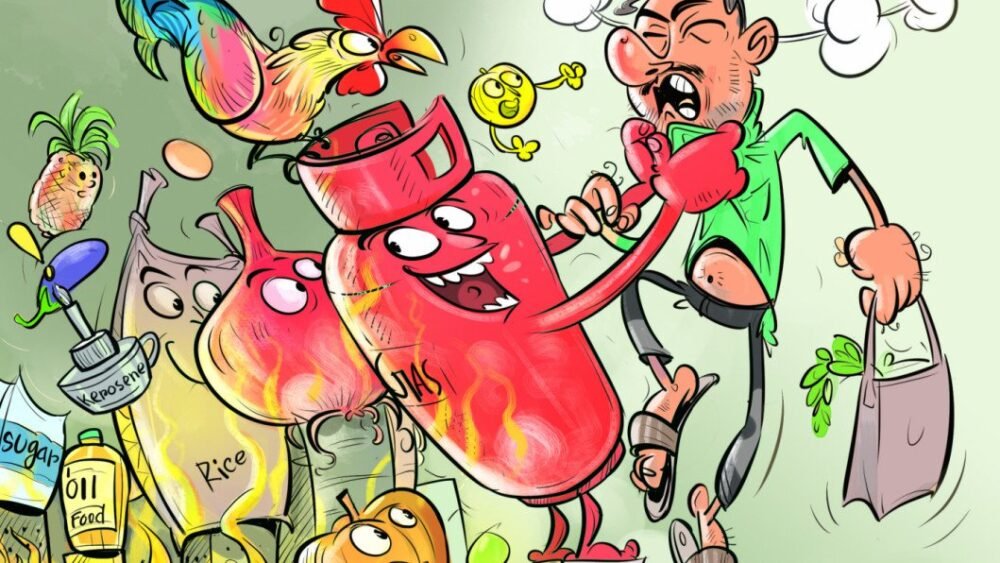 The year 2022 brought with it some big challenges for the majority of people in Bangladesh. The cost of living increased, and prices of oil, gas and electricity went up. Each price increase was like an attack on the public, and led to the widespread rise in the price of all sorts of goods.

The war in Ukraine has definitely had an impact on energy prices. Ever since the conflict began in February, the government has pointed to it as the reason behind much of what has happened, and has used the increase of global oil prices as pretext to increase the price at home. But closer inspection tells us that the price of oil has been quite low in the international market since 2014, and the government made a profit of almost Tk 48,000 crore until February, 2022. On the other hand, the losses incurred from the recent rise in prices was Tk 8,000 crore, so the government could have easily offset the two. Instead, it increased prices. And at the end of the year, when oil prices went down again on the international market, the government made the choice to not lower local prices.

Similar to the language used by the World Bank, whenever the government wants to increase the price of oil, the word they use is “adjustment.” In that case, when prices go up internationally, it can go up locally, but when prices goes down internationally, the same should happen on the local level too. But the authorities are only consistent in increasing the price, not lowering it.

Towards the end of the year, we saw that the Bangladesh Energy Regulatory Commission (BERC), which used to hold public hearings to set the prices of electricity and gas, was set aside to put into effect a new law that allows the government to raise prices at any time. On the other hand, it has been decided that oil will be imported through the private sector as well. So it’s not just that the price has been raised; everything else has gone against the interests of the public and against keeping the economy productive.

The rise in oil prices has led to the rise in prices of everyday goods. The scarcity of liquefied natural gas (LNG), which the government imports from abroad, also increased the cost of electricity production. Coupled with rising oil prices, this led to the return of load-shedding in Bangladesh, that too only a few months after celebrating becoming self-sufficient in electricity. The government says there was nothing it could do with regard to the inflation of LNG and oil prices, but a government being helpless is not acceptable, especially since this situation wasn’t unavoidable.

If gas exploration was done properly, if national production capabilities were increased, and if enough heed was paid towards renewable energy sources, then an increase in global oil prices wouldn’t have been a problem for us. But instead of choosing these options, the government chose to import LNG and oil, and take on import- and loan-oriented projects.

This reliance on foreign loans played a massive role in the previous year. Compared to 2014-15, the size of foreign loans was 20 times more – almost Tk 100,000 crore. Foreign loans in the private sector is also up to almost USD 17 billion now. This burden has led to a rising pressure for loan repayments, and the quick depletion of foreign currency reserves, forcing the government to seek a loan from the International Monetary Fund (IMF). However, the loan amount – around USD 4 to 4.5 billion – isn’t astronomical; Bangladesh makes more than that in two months with remittances.

So, while the IMF loan isn’t that significant in terms of size, the reason the government was eager to take it is because it makes them more eligible for international loans. But the pressure to repay loans will continue to increase over the next couple of years, which could spell trouble for Bangladesh if remittance and export earnings don’t also increase accordingly.

Meanwhile, the value of the taka has diminished. A US dollar that used to fetch Tk 85 now fetches more than 100. The impact of this can be seen in the export sector, where business owners saw a lot of profit, but on the other hand, import costs have gone up significantly.

But what is happening to real income? Let’s consider an RMG sector worker, who has a minimum wage of Tk 8,000. Studies suggest that a four-person family living in Dhaka, renting an apartment for Tk 10,000-11,000, require Tk 47,000 as cost of living. If both partners work overtime for Tk 10,000-11,000 a month, they make about half of the amount they need, which means regular workers remain below the poverty line.

The way the prices of necessary goods have gone up, the Tk 10,000 that someone might make in a month is worth maybe Tk 7,000-8,000 now, meaning real income has gone down by Tk 2,000. On the other hand, the owner class has seen an increase in income. On exports, with a dollar fetching Tk 105 instead of Tk 85, export earnings have gone up by Tk 90,000 crore without any other changes, simply because of dollar prices. But workers are not receiving any share of the profits, as their real income shrinks and the owner class’ real income goes up.

The rapid increase in the prices of goods led to the TCB’s subsequent programmes of selling food products for low cost, where we have seen some horrific scenes. People stand in lines for hours on end because they have no choice. These valuable hours could’ve been spent working and earning an income, but they are still forced to take that time and queue for hours, and even then sometimes, they can’t get access to food. Men, women, old and young alike, have all had to endure this cruel experience.

Despite this, the demand for universal rationing does not have enough momentum and the government did not seem remotely concerned, even though in 2022, we clearly saw the burning need for a universal rationing system, something that is quite widespread in India. The rise in the prices of goods has led to many people suffering from a silent famine. Surveys have shown that around 60-70 percent of people are either skipping at least one meal every day, or they are consuming food that is not up to the mark in terms of nutritional qualities.

In spite of these enormous economic pressures, the government seemed more preoccupied with using the police, or Chhatra and Jubo League, in asserting its dominance over political meetings and processions last year. They have continued to denied existing issues. While protestors demonstrated against the prices of goods, oil, gas and electricity going up, ministers argued that we are in heaven, that the people are happily enjoying the fruits of development, and the country is devoid of all corruption. The government and its ministers’ reality and our reality seem to be as different as heaven and earth.

In the latest Income Expenditure Survey, we can see that everyone has seen a decrease in income, other than the top 10 percent of earners. The lowest 10 percent of earners have seen their earnings halved in the last 10 years, and the lowest five percent have seen it cut down to a third. Real income is decreasing for the majority but it is increasing for top earners, leading to a centralisation of wealth.

In fact, 2022 has been a year of intense centralisation of wealth, in which the government has played an important role. For instance, in the banking sector, some groups were able to take unlimited loans, and were allowed to default or take out loans under false pretences. This has been a common practice for many years, but last year, these practices intensified. Media reports suggest that S Alam Group has used their influence and taken more than Tk 30,000 crore in loans from Islami Bank and others. Sikder Group also took out loans from different banks, despite their position as loan defaulters.

Another way wealth was accumulated was through rental and quick rental power plants. Eleven groups, since 2014, have made Tk 60,000 crore without producing any electricity at all through contracts that were designed specifically for this end. These practices intensified last year, leading to a centralisation of wealth, and the laundering of this wealth went hand in hand with it as well. Besides, in 2022, we witnessed the government provide more and more benefits to loan defaulters in the banking sector.

How were these collusive contracts allowed to be set up? The fuel and power sector is already above the law; the rules are not followed in this sector and to make sure these practices don’t face legal challenges, the government passed an impunity law in 2010. This has ensured that contracts are signed without tenders, without the need to go to court. Alongside local companies, many Indian companies (including Adani) are also receiving extra benefits in the forms of contracts to import oil and electricity. As a result, a big portion of whatever wealth is being created is being funnelled into the hands of these local and foreign companies.

The Padma Bridge was inaugurated last year. And in the same year, we saw three times the amount of money needed to build Padma Bridge (almost Tk 90,000 crore) given to some groups just to have idle power plants. One company took loans from various banks worth the same amount of money, and then defaulted on it.

Because of the centralisation of this massive amount of wealth in the hands of a select few, the education and health sectors have been on the decline this year. In the health sector, we have seen buildings being constructed and equipment being bought, but they are not being put to use. Right now, development has two streams, construction and purchase. These are the two ways development is materialising, regardless of whether it is necessary or not.

Right at the beginning of 2022, we saw protests against certain VCs in universities. Development projects in some universities have also been mired in corruption allegations. Yet, no resolution has been reached. In fact, the government’s stance on these issues became clear last year. No matter the allegation, the government’s first response is to deny the existence of the problem. Instead, the authorities have provided benefits to loan defaulters, shielded money launderers, and patronised land-grabbing, hill-grabbing and forest-grabbing in different ways.

Last year, the excitement of the Bangladeshi people surrounding the FIFA World Cup also reminded us that playgrounds in this country are being taken over one by one. In sports, in cultural activities, in everyday life, in education and in health, even after 51 years of independence, we are still going back on the promises of the Liberation War.

Transcribed and translated by Azmin Azran.

Anu Muhammad is a professor of economics at Jahangirnagar University.