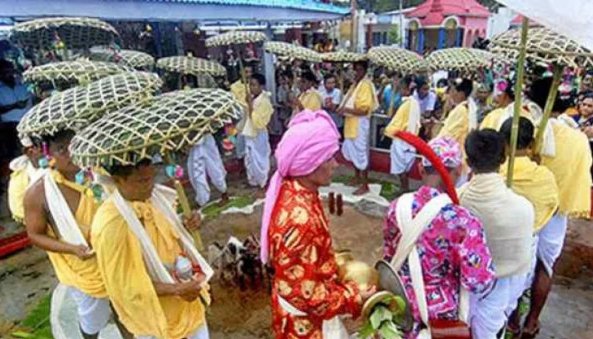 Tripura News Desk: The traditional Kharchi fair and festival will be organized this year with much grandeur at the temple of 14 deities situated at Khayerpur in Agartala in the West Tripura district.

The festival will be organized in such a grand manner after a gap of two years due to Covid 19-induced restrictions, Tripura Assembly Speaker Ratan Chakraborty said in a press conference in Agartala on Monday.

He said the seven-day long festival and fair will start on July 7 and continue till July 13.

More than 1.5 thousand artistes from different states of the Northeast will perform in the series of cultural events going to be organized every evening.

Apart from that, over 800 stalls have been demarcated which are slated to be distributed through an impartial lottery.

He said adequate security measures had been put in place to ensure that no breach of security takes place during the festival.

“According to our expectations, lakhs of devotees from different parts of the state as well as the country will take part in the festival and fair. We have also made arrangements for accommodation and fooding for the monks coming from different shrines.

“Last two years, the festival turned into a low-key affair with rituals being performed with no major arrangements. This year, the festival will be organized like the previous years,” said Chakraborty.

He said, over 150 scouts and guides had been pressed into action for crowd management and heavy deployment of Police and TSR Jawans will be there in the temple areas.

He said that the tourism department has been given the responsibility of the peripheral areas of the temple for setting up a tourist destination equipped with all modern facilities.

“The tourism is doing its work, we hope soon the temple of 14 deities that was set up when Tripura was a princely state will make its mark on the country’s tourism map,” said Chakraborty.