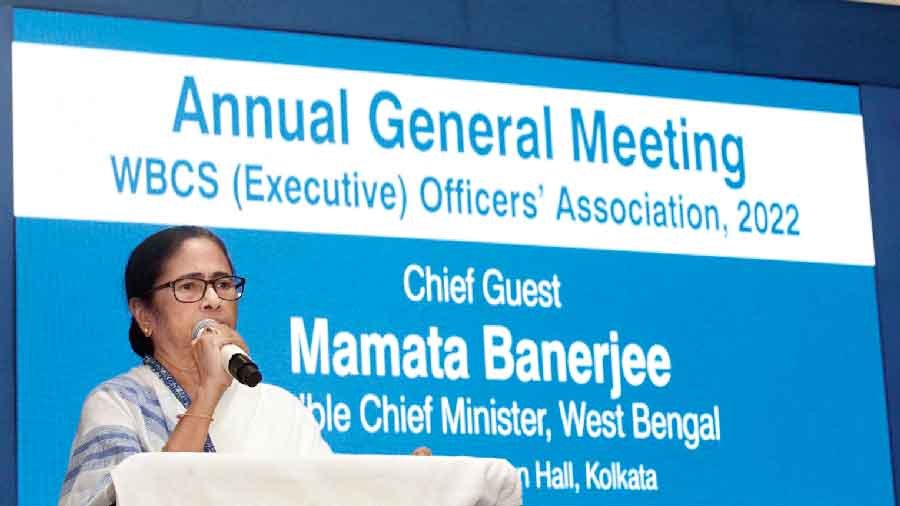 Mamata reaches out to WBCS officers, announces slew of benefits

According to sources, Didi was trying to address discontent among the officers arising due to government’s decision of enhancing special allowance for IAS officers

Pranesh Sarkar, Calcutta: Mamata Banerjee on Thursday announced a slew of benefits for the WBCS (executive) officers, the timing of the announcements barely a year before the next year’s panchayat polls making it clear that the chief minister wants to keep the state government officers in good humour.

“The special allowance of the WBCS officers will now be on a par with IAS officers… Officers in the post of special secretary for two years can be elevated to the position of secretary in the department,” Mamata said while addressing the annual general meeting of the WBCS (Executive) Officers Association at Town Hall on Thursday.

The other pet peeve of the state cadre officers in terms of their career growth in the administrative hierarchy was also addressed by Mamata.

“It is still not clear how many posts of secretaries in the department will be created for the WBCS officers, but it is remarkable that state civil service officers will also be posted in the position which was so far reserved for IAS officers,” said a senior official.

Mamata also announced some other facilities for the state civil service officers. The WBCS officers on reaching the apex scale for the cadre (basic pay of Rs 2.01 lakh a month) would get an additional allowance of Rs 10,000 a month, she said.

“This was announced as the WBCS officer had a complaint that their career advancement opportunities are limited. Only 100 officers are elevated to the rank of special secretary, which is the highest rank one WBCS officer can get). This new move will help many officers,” said a senior official.

This apart, annual health check up for the WBCS officers would be provided. This facility was so far limited to IAS officers only. Mamata was aware of the grievances of the WBCS officers and she wanted to make them feel good, a source said.

“The role of the WBCS officers will be very important in the coming days. First, the BDOs and the SDOs play the most important role in delivering services to common people via Duare Sarkar camps. BDOs will be the returning officers in gram panchayat and panchayat samitis and SDOs would be the returning officers of zila parishad seats in next year’s panchayat polls,” said a source.
The chief minister also said opportunities for the WBCS officers would be increased in near future. “Today we have 23 districts. Tomorrow, it could be 46 districts. More WBCS officers would be posted in important positions including DM,” she said.

She said that the state government has already written a letter to the centre urging it to increase the quota of IAS officers for the state.